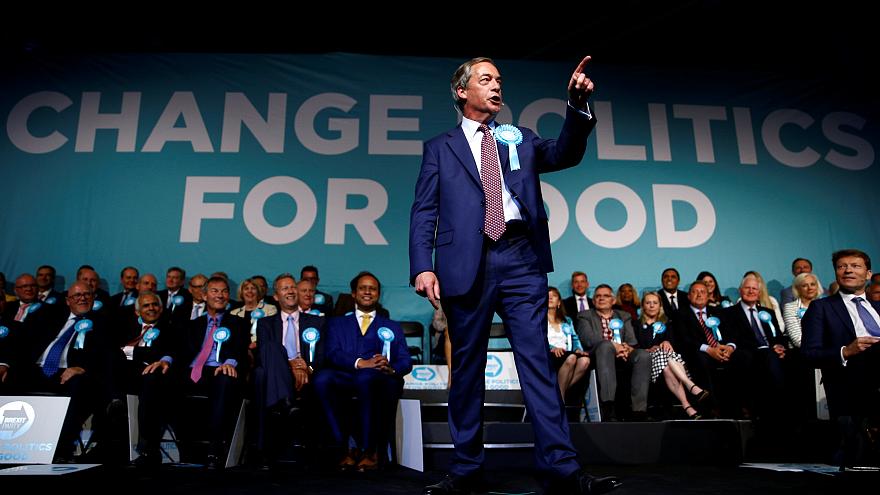 The Brexit Party is forecast to become the largest national party seated in the European Parliament, according to projections from Europe Elects, a further signal that eurosceptic parties will make major gains in the EU elections.

The projections come as YouGov released a survey on Wednesday indicating the upward trajectory for Nigel Farage’s party remains unmatched, pulling in 37% of votes, marking an increase of two percentage points when compared to last week’s figures.

The Brexit Party leapfrogged Italy’s anti-immigration Lega party into first place when it comes to national party seat counts in the European Parliament. The previous week the Brexit Party had 25 seats while Matteo Salvini’s populist party had 26 in projections from Europe Elects, a group that provides poll aggregation and election analysis.

The two parties are flanked by other eurosceptics, including Poland’s ruling Law and Justice party, and Marine Le Pen’s Rassemblement National in France.

“One of the reasons is because the eurosceptic parties are more united than the pro-Europe parties,” he told Euronews.

“Like in France, on the left you have the Socialists, the Greens, Macron’s party, of course — and these are pro-European. Whereas Le Pen’s Rassemblement National is able to get strong results because most of the right-wing eurosceptic votes are united behind her, and not splintered off among other similar parties.”

Moderates to pull through?

When it comes to the European Parliament, however, it’s the political groups that national parties align with that matter most — and not the performance of an individual party itself.

The centre-right European People’s Party group remains the frontrunner with 173 seats — but it is in a precarious position. The group, led by German MEP Manfred Weber, lost five seats when compared to last week’s projection. This means the centre-left Socialists and Democrats and its candidate Frans Timmermans are 21 seats shy of the EPP.

It also means Hungary’s Viktor Orban, leader of the country’s ruling Fidesz Party, is the kingmaker.

Orban previously withdrew his support for Weber as a candidate and has been on the receiving end of a charm offensive launched by Italy’s Salvini. The Italian deputy prime minister is housed within the far-right Europe of Nations and Freedom group, which is part of a larger European Alliance of Peoples and Nations that includes Le Pen’s Rassemblement National and Germany’s Alternative for Germany (AfD), among other nationalist groups.

But don’t expect the far-right alliance to edge out the mainstream groups in parliament.

“Matteo Salvini’s allies are heading to become the fourth strongest group in the European Parliament with 82 seats. Even if with Fidesz’s support, it’d be hard for them to overtake the ALDE/Macron alliance, which is currently at 109 seats,” said Schminke.

While the Brexit Party is forecast to dominate the elections in the UK, it’s the historic hits the Labour party is slated to take that will benefit the liberal ALDE group in EU parliament.

The party is forecast to pull in the worst results since 1910, as Labour leadership has yet to take a clear stance on a second referendum.

“Both in Northern Ireland and Great Britain, the liberals are making significant gains compared to previous weeks. The liberals in the UK have always had a clear “Remain” stance, which now helps them in the European election campaign,” said Schminke.

“While the EPP has been suffering over the past week, ALDE enjoys a slight rise in voter support — especially in Finland and the United Kingdom.”

For a full breakdown of European Parliament seat projections by country, see the chart below.

The flow chart below illustrates how projected votes have evolved since the 2014 European Elections.

The data in the European Parliament projection is collected by Europe Elects and is based on publicly available opinion polls about voting intentions and election results in countries of the EU28 (member states of the European Union with the United Kingdom). In cases where no European election opinion poll was available, opinion polls for national elections were used. In cases where no opinion polls on voting intentions were published since the last national election, the election result was used. For more information on the methodology, please visit Europe Elects.

Euronews has partnered with Europe Elects for the EU elections.