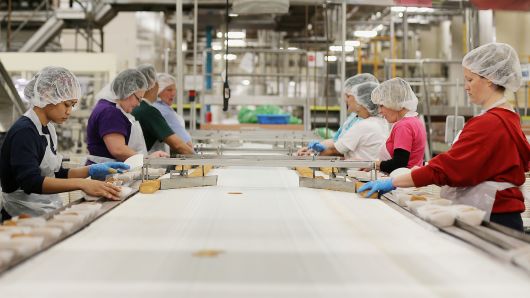 US producer prices post the biggest increase in 5 months

U.S. producer prices increased by the most in five months in March, but underlying wholesale inflation was tame.

The Labor Department said on Thursday its producer price index for final demand rose 0.6 percent last month, lifted by a surge in the cost of gasoline. That was the largest increase since last October and followed a 0.1 percent gain in February.

In the 12 months through March, the PPI rose 2.2 percent after advancing 1.9 percent in February. Economists polled by Reuters had forecast the PPI would climb 0.3 percent in March and increase 1.9 percent on a year-on-year basis.

A key gauge of underlying producer price pressures that excludes food, energy and trade services was unchanged last month after ticking up 0.1 percent in February. The so-called core PPI increased 2.0 percent in the 12 months through March. That was the smallest annual increase since August 2017 and followed a 2.3 percent rise in February..

Data on Wednesday showed consumer prices rose by the most in 14 months in March, driven by more expensive gasoline. But core inflation remained muted amid a plunge in the cost of apparel.

Slowing domestic and global growth are keeping inflation contained. Wage inflation has also been moderate despite a tight labor market.

Minutes of the Federal Reserve’s March 19-20 policy meeting published on Wednesday described inflation as “muted,” though officials expected it to rise to or near the U.S. central bank’s 2 percent target. The Fed’s preferred inflation measure, the core personal consumption expenditures (PCE) price index, is currently at 1.8 percent.

Gasoline accounted for over 60 percent of the 1.0 percent rise in goods prices last month. Goods prices increased 0.4 percent in February.

The cost of services increased 0.3 percent in March after being unchanged in the prior month. Prices for healthcare services fell 0.2 percent last month. There was a sharp drop in the cost of hospital outpatient services. Those healthcare costs feed into the core PCE price index.