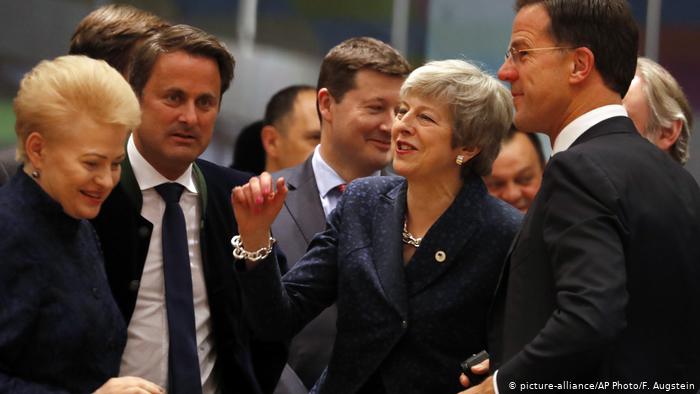 The EU has agreed to a plan to delay Brexit until 22 May 2019, if MPs approve the withdrawal agreement approved next week.

If Ministers do not back the deal then the EU will agree to a shorter delay until April 12.

Keep up to date with our live blog below:

EU Council President Donald Tusk wrote in a Tweet the “EU27 responds to UK requests in a positive spirit”.

The UK is scheduled to depart from the bloc on March 29, with or without a deal if no extension is agreed.

The EU agreement also suggested that the UK could ask for a longer delay on the condition that it takes part in the European Parliament election on May 23. Britain’s prime minister has previously said that option was not favourable.

May said late on Thursday “we are now at the moment of decision,” and that she wants to leave with a deal. May added, she felt it would be wrong to ask the UK to take part in the EU election three years after voting to leave.

European Council President Donald Tusk said at a conference on Thursday that all Brexit options were still open for Britain until April 12. Watch his comments in the player above.

“Until that date (April 12), all options will remain open and the cliff-edge date will be delayed. The UK government will still have a choice between a deal, no deal, a long extension or revoking Article 50,” Tusk said.

He added, “the 12th of April is a key date in terms of the UK deciding whether to hold European Parliament elections. If it has not decided to do so by then, the option of long extension will automatically become impossible.”

EU Commission President, Jean-Claude Juncker, told the press conference the atmosphere had been “much better” than Ihehad expected among EU leaders and that he was now “much more realistic”.

After twice failing to get parliamentary backing for her EU divorce deal, embattled UK PM May had asked the EU to move the UK’s departure date back three months to June 30.

Chinese real estate is between a rock and a hard place: Strategist. >>> goldwellestate.com