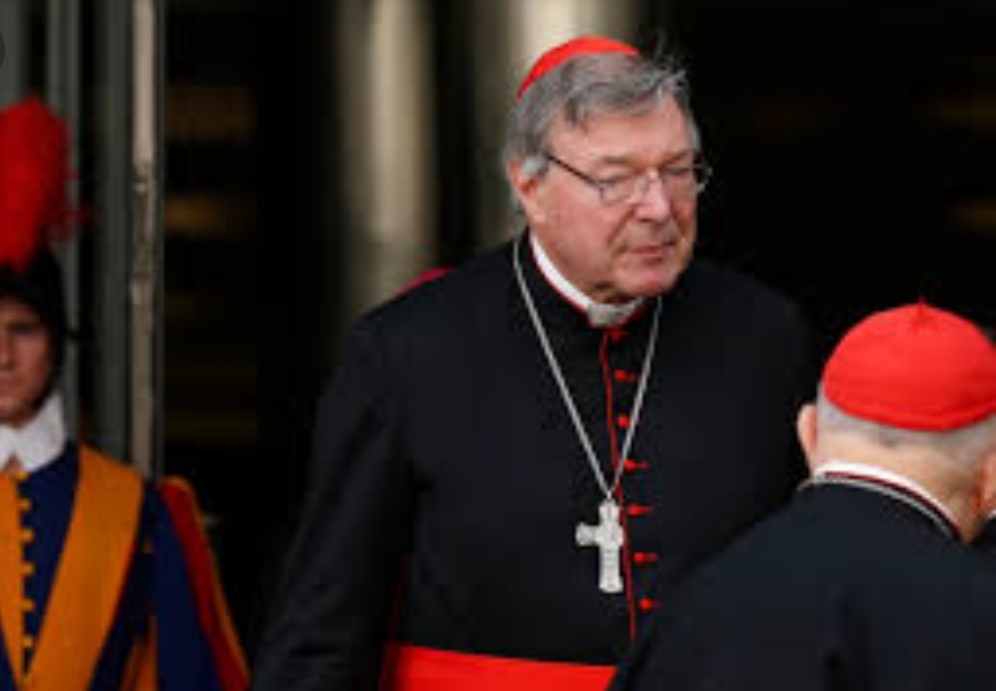 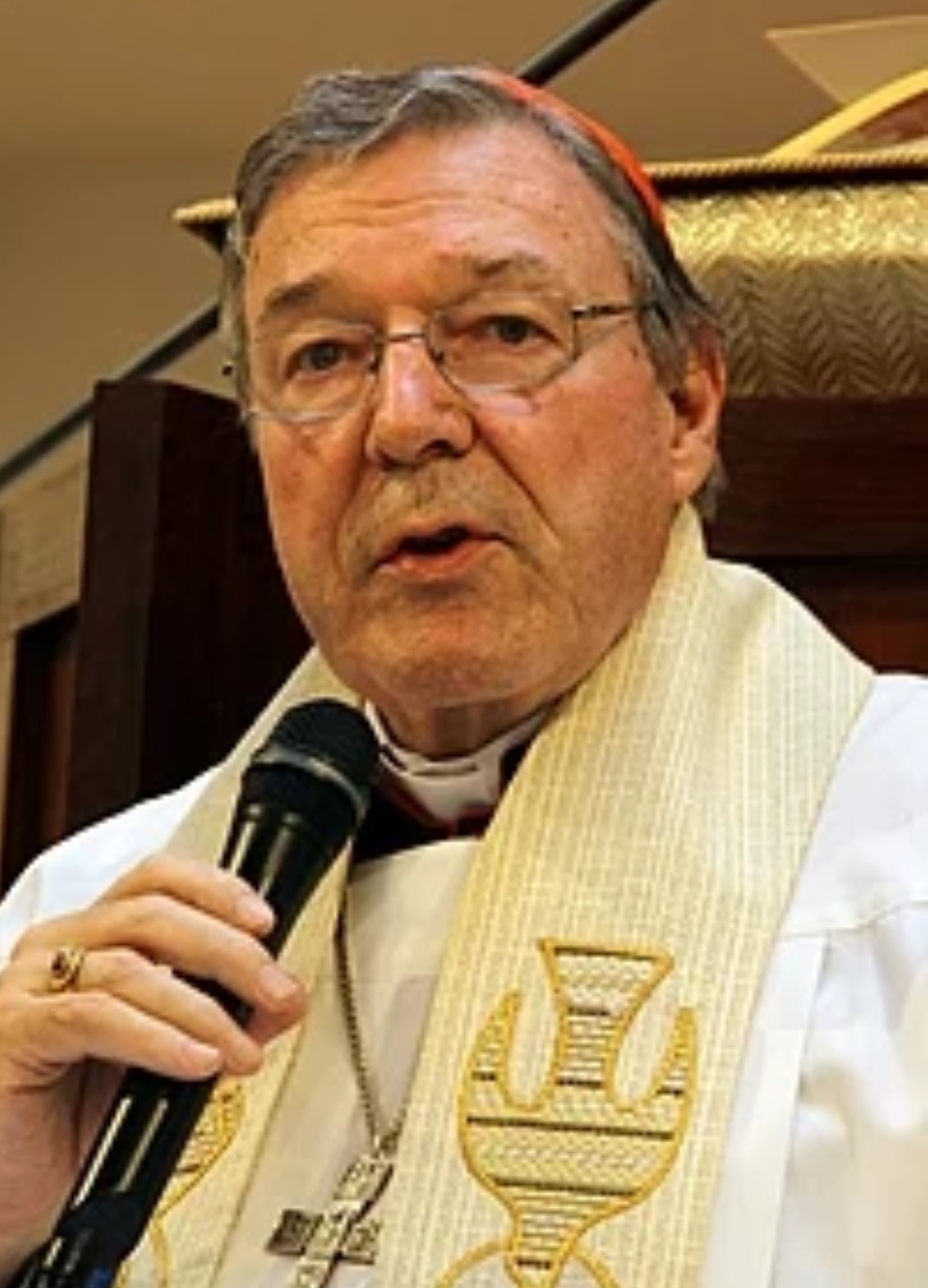 Vatican treasurer, the third most senior Catholic in the world, convicted on five charges in Australian court case

Cardinal George Pell, once the third most powerful man in the Vatican and Australia’s most senior Catholic, has been found guilty of child sexual abuse after a trial in Melbourne.

A jury delivered the unanimous verdict on 11 December in Melbourne’s county court, but the result was subject to a suppression order and could not be reported until now.

A previous trial on the same five charges, which began in August, resulted in a hung jury, leading to a retrial. 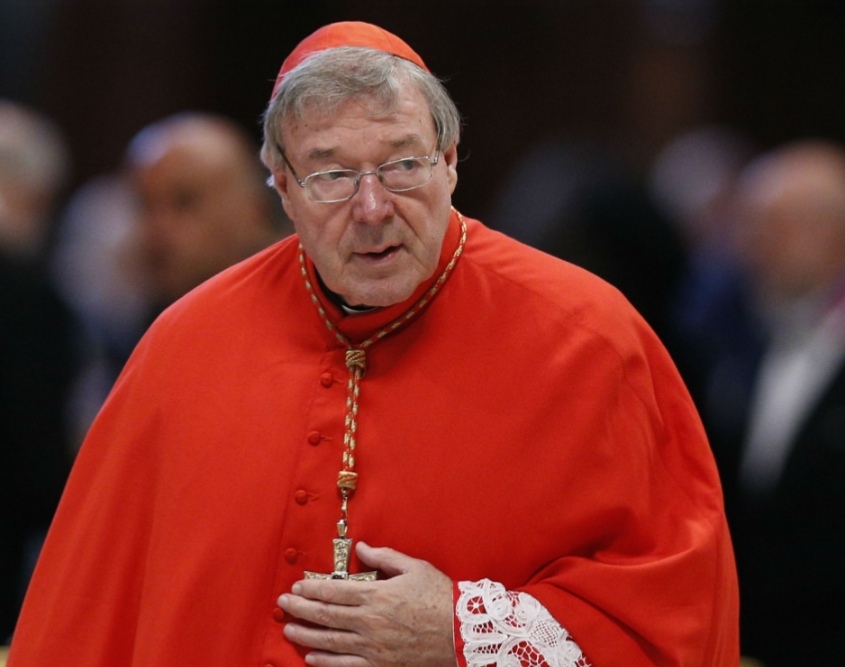 He is due to be sentenced next week but may be taken into custody at a plea hearing on Wednesday, having been out on bail since the verdict and recovering from knee surgery.

Pope Francis, who has previously praised Pell for his honesty and response to child sexual abuse, has yet to publicly react, but just two days after the unreported verdict in December the Vatican announced that Pell and two other cardinals had been removed from the pontiff’s council of advisers.

Pell’s conviction and likely imprisonment will cause shockwaves through a global Catholic congregation and is a blow to Francis’s efforts to get a grip on sexual abuse.

It comes just days after an unprecedented summit of cardinals and senior bishops in the presence of the pope at the Vatican, intended to signal a turning point on the issue that has gravely damaged the church and imperilled Francis’s papacy.

Pell walked from the Melbourne courtroom to a waiting car surrounded by a phalanx of police and press. He was jeered by survivors of sexual abuse who had gathered outside.

“You’re going to burn in hell. Burn in hell, Pell,” one man yelled.

Pell did not comment but a statement released by his solicitor Paul Galbally said the cardinal “has always maintained his innocence and continues to do so.”

“An appeal has been lodged against his conviction and he will await the outcome of the appeal process.”

One of the complainants at the centre of the case, who cannot be named, asked for privacy in the wake of the suppression order being lifted, saying he was “a regular guy working to support and protect my family as best I can.”

“Like many survivors I have experienced shame, loneliness, depression and struggle,” he said in a statement.

“Like many survivors it has taken me years to understand the impact upon my life.

“At some point we realise that we trusted someone we should have feared and we fear those genuine relationships that we should trust. I would like to thank my family near and far for their support of me, and of each other.”

Before returning to Australia to face the charges, Pell was for three years prefect of the secretariat for the economy of the Holy See, making him one of the most senior Catholics in the world. He was one of Francis’s most trusted advisers, and was handpicked to oversee the Vatican’s complex finances and root out corruption.

On the day of the dramatic verdict, after a four-and-a-half-week trial, Pell stood in the dock showing no reaction and staring straight ahead. The room was silent as the foreman told the court that the jury had found the cardinal guilty on all charges. Pell’s defence barrister, Robert Richter QC, when asked by journalists if he would appeal, responded: “Absolutely.”

The jury found that in the second half of December 1996, while he was archbishop of Melbourne, Pell walked in on two 13-year-old choirboys after a Sunday solemn mass at St Patrick’s Cathedral and sexually assaulted them.

The complainant, who is now aged 35, said he and the other choirboy had separated from the choir procession as it exited the church building. The prosecution’s case hinged on his evidence, as the other victim died in 2014 after a heroin overdose. Neither victim told anyone about the offending at the time.

After leaving the procession, the complainant said, he and the other boy sneaked back into the church corridors and entered the priest’s sacristy, a place they knew they should not be. There they found some sacramental wine and began to drink. The complainant alleged that Pell had walked in on them and told them something to the effect that they were in trouble.

Pell manoeuvred his robes to expose his penis. He stepped forward, grabbed the other boy by the back of his head, and forced the boy’s head on to his penis, the complainant told the court.

Being in the choir was a condition of the complainant’s scholarship to attend St Kevin’s College, an elite independent school in the affluent inner-Melbourne suburb of Toorak, the court heard.

“I knew a scholarship could be given or taken away even at that age,” the complainant told the court. “And I didn’t want to lose that. It meant so much to me. And what would I do if I said such a thing about an archbishop? It’s something I carried with me the whole of my life.”

The complainant alleged that either later that year in 1996, or in early 1997, Pell attacked him again. He said he was walking down a hallway to the choristers’ change room, again after singing at Sunday solemn mass at the cathedral, when Pell allegedly pushed him against the wall and squeezed his genitals hard through his choir robes, before walking off.

The complainant told the court that after the attacks he could not fathom what had happened to him and that he dealt with it by pushing it to the “darkest corners and recesses” of his mind.

In his police statement, the complainant said he remembered Pell “being a big force in the place”.

“He emanated an air of being a powerful person,” he said. “I’ve been struggling with this a long time … and my ability to be here. [Because] I think Pell has terrified me my whole life … he was [later] in the Vatican. He was an extremely, presidentially powerful guy who had a lot of connections.”

In his closing address, the crown prosecutor Mark Gibson told the jury their verdict would come down to whether they believed the complainant beyond reasonable doubt. They should find the complainant an honest witness, Gibson said.

Pell pleaded not guilty from the beginning. He was interviewed by a Victorian detective, Christopher Reed, in Rome in October 2016, and the video of that interview was played to the court. In that interview Pell described the allegations as “a load of garbage and falsehood”

When Reed said the attacks were alleged to have occurred after Sunday mass, Pell responded: “That’s good for me as it makes it even more fantastically impossible.”

Pell’s defence team told the jury there were so many improbabilities in the prosecution’s case that they should conclude the abuse could not have happened. Richter said it was unlikely that two boys could leave the choir procession after mass unnoticed or that the sacristy would be unattended or left unlocked, or that Pell would be able to manoeuvre his robes to show his penis in the way described by the complainant. The robes were brought into the court for jurors to view.

Richter used a PowerPoint presentation in the retrial during his closing address to the jurors, something he did not do in the first. One of the slides read: “Only a madman would attempt to rape two boys in the priests’ sacristy immediately after Sunday solemn mass.”

In his directions to the jury, Kidd told them that the trial was not an opportunity to make Pell a scapegoat for the failures of the Catholic church.

The jury took less than four days to reach their unanimous verdict.

As many as 100 journalists accused of breaching the suppression order have been threatened with a charge of contempt of court and could face possible jail terms. Letters were sent to journalists from major media outlets which published or broadcast pieces in relation to the trial including News Corp, Nine Entertainment and the Australian Broadcasting Corporation in February.

The reason for the strict order was that Pell faced a second trial in relation to separate alleged historical offences. The first trial was suppressed temporarily so information from it would be less likely to influence the jury in the second. Suppression orders are not unusual in such cases.

But Kidd has now ordered that reporting restrictions be lifted after the Department of Public Prosecutions dropped the second set of charges. Kidd had ruled that key evidence was inadmissible and could not be used, significantly weakening the prosecution’s case.

“The bishops agree that everyone should be equal under the law, and we respect the Australian legal system. The same legal system that delivered the verdict will consider the appeal that the Cardinal’s legal team has lodged.”

“Our hope, at all times, is that through this process, justice will be served.”

95-year-old billionaire Charlie Munger: The secret to a long and happy life is ‘so simple’. To more vatnplus.com