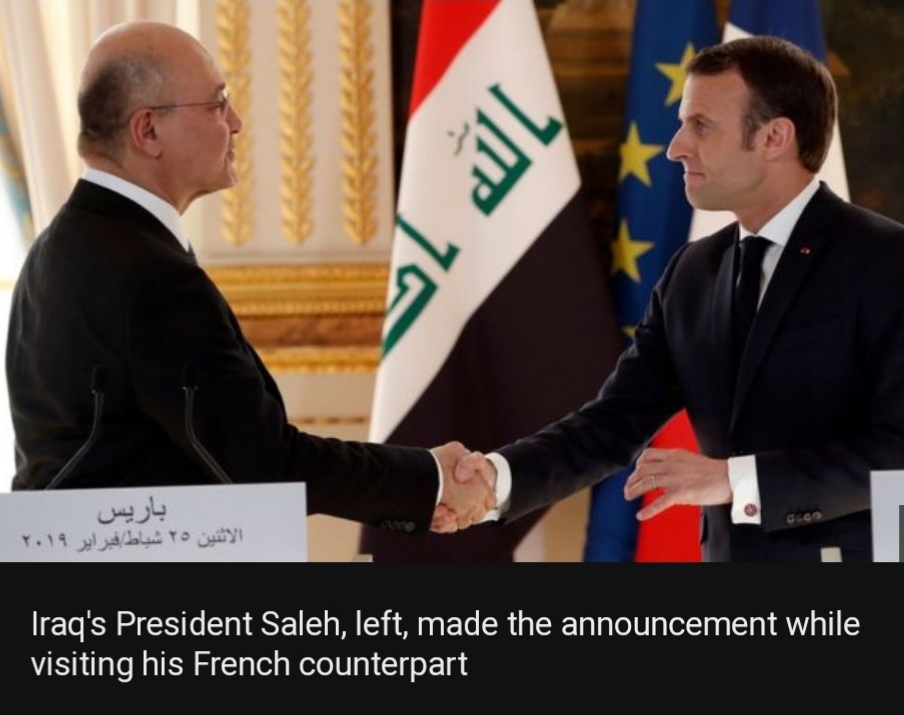 Thirteen French citizens accused of fighting for the Islamic State group are to be tried in Iraq rather than face charges back home in France.

French President Emmanuel Macron declined to comment, saying it was a sovereign matter for Iraq.

The news comes as several Western countries struggle with the fate of alleged militants returning from Syria.

The UK, Belgium, the Netherlands and the United States have all grappled with the question of whether to allow those who left to join the Islamic State to return – and potentially face prosecution when they do.

What will happen to the French?

The fate of the 13 French citizens was revealed during a press conference between presidents Macron and Saleh in France, following bilateral talks.

They are due to be tried on terrorist charges – which may carry the death penalty under Iraqi law.

French broadcaster BFMTV reports that it will make no difference whether they are accused of directly fighting for the Islamic State group, or merely providing other assistance to it – the penalty remains the same.

In France, the government says those who commit such crimes abroad should be tried in the territory in which the offence occurred, a stance it has repeated recently amid a global debate on returnees from Syria.

Despite facing trial abroad, the French captives can expect the normal consular assistance offered by the republic to any of its citizens jailed in a foreign country.

Iraq’s decision to prosecute the 13 allows France to sidestep the political maze facing many other countries – though some reports suggest there may be dozens of other French captives awaiting a similar fate.

The French case is the latest development in an ongoing crisis about how to treat those who travelled to Syria during its civil war, but now want to return to their home countries in Europe.

What is the wider context?

Kurdish fighters from the Syrian Defence Forces (SDF) hold hundreds of prisoners captured during their fight against the IS group. But the SDF is an alliance of militias, and has warned that they cannot prosecute their captives and imprison them indefinitely.

US President Donald Trump, meanwhile, has urged European countries to take custody of their citizens and put them on trial – warning that if they refuse, the prisoners may simply be released instead.

The question over their fate has prompted national debate in several countries.

In the UK, there is a national debate over the future of Shamima Begum, who left London in 2015, aged 15, to travel to Syria . Now living in a refugee camp, and with a newborn child, she has asked to return.

The UK has instead said it will strip her of her citizenship – arguing that it can do so despite international law, because she is entitled to Bangladeshi citizenship through inheritance.

Her husband is a Dutch convert to Islam, and is thought to have surrendered to a group of Syrian fighters about two weeks ago. She has previously said she may apply for Dutch citizenship.

And despite President Trump’s urging to European nations to take in their citizens, he has publicly banned the return of Alabama native Hoda Muthana .

Meanwhile, in Belgium, the government is wrapped in a court case to prevent women returning from camps in Syria – though it remains open to taking in their children.

Russia has repatriated more than 100 children whose parents are imprisoned in Syria and Iraq, returning them to family members.

Shake Shack’s Danny Meyer changed the restaurant industry by breaking all the rules. Here’s how. To know more trip-expert.com