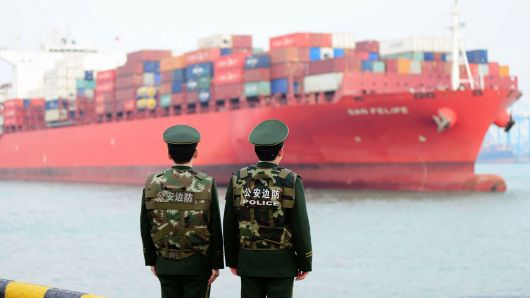 The United States is reportedly asking China to address the value of the its currency as part of the trade deal.

The move would be aimed at mediating any effort by the Chinese to devalue the yuan to counter American tariffs, people familiar with the situation told Bloomberg News. The Trump administration has insisted that moves to devalue the yuan to buoy Chinese exports would be countered with additional or more severe American tariffs, sources told Bloomberg News.

Representatives for the two nations resumed overall trade discussions on Tuesday, with follow-up sessions at a higher level scheduled for later in the week, the White House said Monday. Though last week’s deliberations that ended in Beijing concluded without a deal, officials said progress was made on some contentious issues.

U.S. stocks extended their gains Tuesday after President Donald Trump said that the March deadline is not a “magical date,” suggesting the cutoff could be adjusted.

Still, current talks are aimed at “achieving needed structural changes in China that affect trade between the United States and China. The two sides will also discuss China’s pledge to purchase a substantial amount of goods and services from the United States,” the White House said in a statement.

Meetings between the top brass will start on Thursday and be led by U.S. Trade Representative Robert Lighthizer, a vocal advocate of pressing China to end practices that the U.S. says include forced technology transfers and intellectual property theft.

As of the latest reading, one U.S. dollar is currently worth 6.75 Chinese yuan, down from highs above 6.9 in November. The U.S. Trade Representative’s office, which is spearheading trade talks with China, did not immediately respond to CNBC’s request for comment.

Beijing least year reintroduced measures to stabilize its managed currency, including a calculation method called the counter-cyclical factor (CCF), aimed at keeping the yuan’s daily midpoint fixed to a relatively stable value. But China has faced international pressure in the past for what many deemed unfair manipulation of its currency. Many U.S. economists argue that China’s tampering in years past gave their exports a boost as a weaker yuan made Chinese exports less expensive.