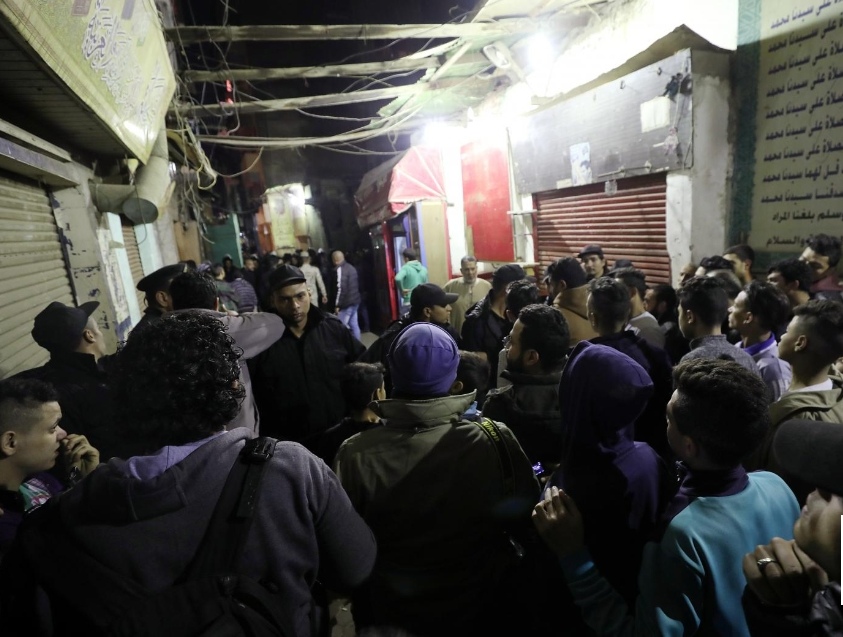 Police officers control the crowd at the scene where policemen werekilled when an explosive device carried by a militant they were pursuing exploded in Cairo, Egypt, February 18, 2019.

Three policemen were killed and five people were wounded, three of them civilians, when an explosive device carried by a militant they were chasing detonated in central Cairo on Monday night.

The interior ministry said two policemen died when the bomb went off in El-Darb al-Ahmar district in the capital’s old Islamic Cairo, while three officers were wounded. A security source and newspapers, including Al-Masry Al-Youm, reported on Tuesday that one of the injured officers had died of his wounds.

It was the third security incident to hit the country in the past week, including an attack on a military checkpoint in the Sinai Peninsula that left 15 soldiers and seven militants dead.

But attacks in the capital are relatively rare, though a roadside bomb in Giza killed three Vietnamese tourists and an Egyptian guide in December.

The interior ministry said on Monday that security forces were pursuing the man in the search for the perpetrator of an attempted attack against a police patrol in western Cairo on Friday.

After catching the suspect in Cairo’s ancient Islamic district close to the Al Azhar mosque, “one of the explosive devices in his possession exploded, causing the death of the terrorist and the martyrdom of a police officer from national security and an officer from Cairo investigations (department)”, the Monday statement said.

At least three civilians were also wounded, including a Thai student, security sources said. The area around Al Azhar mosque is home to crowded markets and is a popular tourist site.

Egyptian security forces have been waging a campaign against Islamist militants since 2013 focused in the north of Egypt’s Sinai peninsula.

Foreign ownership of Saudi stocks to rise to 10%. To more cachettrading.com