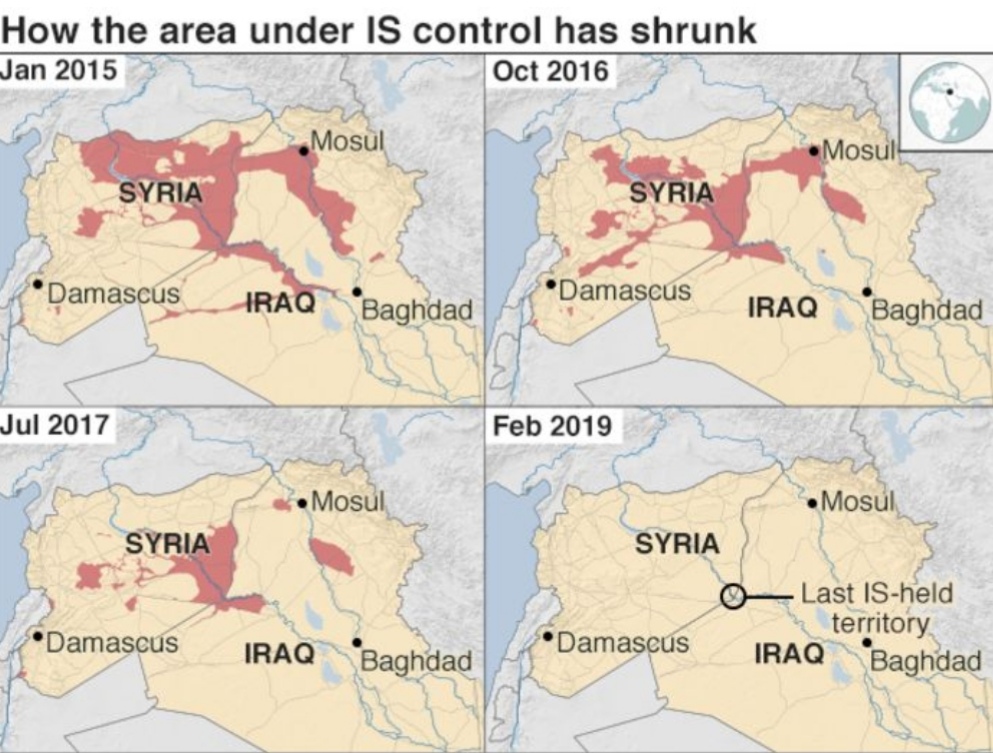 Trump tells European countries to take back IS fighters

Donald Trump: “Put them on trial”

President Trump has told the UK and other European allies to take back and put on trial more than 800 Islamic State (IS) group fighters captured in the final battle against the group.

His tweet comes as US-backed Kurdish forces continue an assault on the last pocket of IS territory on the Syrian side of the Iraqi border.

The IS fighters are being held by the Kurdish-led forces.

Mr Trump added that the IS caliphate was “ready to fall.”

“The US does not want to watch as these ISIS fighters permeate Europe, which is where they are expected to go. We do so much, and spend so much – Time for others to step up and do the job that they are so capable of doing”, he said in a tweet.

The United States is asking Britain, France, Germany and other European allies to take back over 800 ISIS fighters that we captured in Syria and put them on trial. The Caliphate is ready to fall. The alternative is not a good one in that we will be forced to release them……..

Trump administration officials have also told the Sunday Telegraph newspaper that they fear some of the detained soldiers would put European countries at risk unless they are brought to justice.

Mr Trump’s remarks echo those made by the UK’s foreign intelligence chief on Friday, who warned that the Islamic State group is reorganising for more attacks despite its military defeat in Syria.

Alex Younger also told of his concern about jihadists returning to Europe with “dangerous” skills and connections.

The president’s tweets come amid a controversy in the UK over the case of Shamima Begum, one of three schoolgirls who left London in 2015 to join IS.

She has said she wants to return, as does her family, but the government is making no attempt to bring her back to the UK.

What is the latest on the final battle?

US President Donald Trump said on Friday the defeat of IS would be announced “over the next 24 hours”.

But those 24 hours passed on Saturday with no further announcement from the White House on the subject.

Instead, Kurdish fighters said the news was likely to emerge “in the coming few days” as civilians continued to flee.

Jiya Furat, the leader of the battle for Baghuz for the Syrian Democratic Forces (SDF), said IS fighters were now trapped in a 700 sq metre section of the town.

“Thousands of civilians are still trapped there as human shields,” he said on Saturday.

“In the coming few days, in a very short time, we will spread the good tidings to the world of the military end of Daesh [IS].”

IS has suffered substantial losses, but the UN has said it still reportedly controls between 14,000 and 18,000 militants in Iraq and Syria.