Latest Articles
Home NEWS Sold to an ally, lost to an enemy 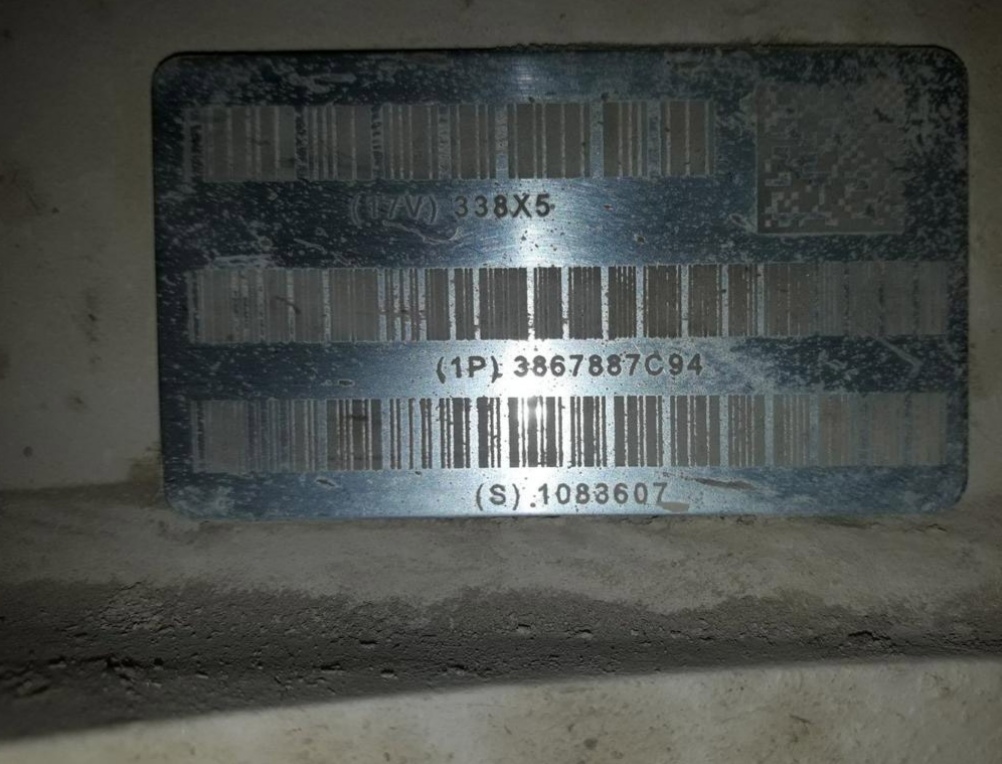 Sold to an ally, lost to an enemy 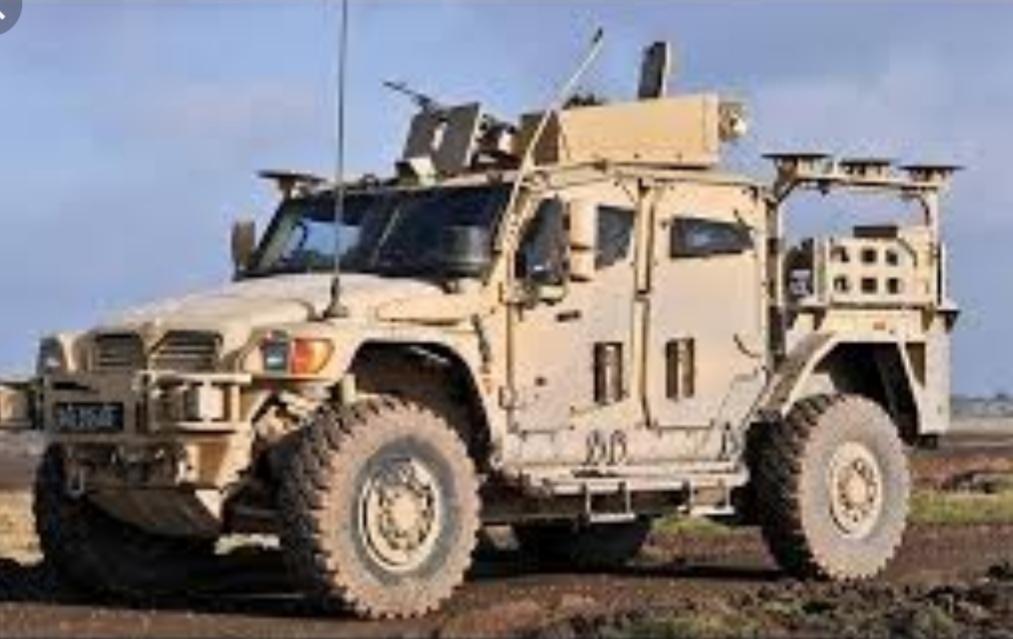 Saudi Arabia and its coalition partners have transferred American-made weapons to al Qaeda-linked fighters, hardline Salafi militias, and other factions waging war in Yemen, in violation of their agreements with the United States, a CNN investigation has found.

The weapons have also made their way into the hands of Iranian-backed rebels battling the coalition for control of the country, exposing some of America’s sensitive military technology to Tehran and potentially endangering the lives of US troops in other conflict zones.

Saudi Arabia and the United Arab Emirates, its main partner in the war, have used the US-manufactured weapons as a form of currency to buy the loyalties of militias or tribes, bolster chosen armed actors, and influence the complex political landscape, according to local commanders on the ground and analysts who spoke to CNN.

By handing off this military equipment to third parties, the Saudi-led coalition is breaking the terms of its arms sales with the US, according to the Department of Defense. After CNN presented its findings, a US defense official confirmed there was an ongoing investigation into the issue.

The revelations raise fresh questions about whether the US has lost control over a key ally presiding over one of the most horrific wars of the past decade, and whether Saudi Arabia is responsible enough to be allowed to continue buying the sophisticated arms and fighting hardware. Previous CNN investigations established that US-made weapons were used in a series of deadly Saudi coalition attacks that killed dozens of civilians, many of them children.

The developments also come as Congress, outraged with Riyadh over the murder of journalist Jamal Khashoggi last year, considers whether to force an end to the Trump administration’s support for the Saudi coalition, which relies on American weapons to conduct its war.

In 2015, Riyadh launched a coalition to oust Iranian-supported Houthi rebels from the country’s capital and reinstate the internationally recognized government of President Abdu Rabu Mansour Hadi. The war split the country in two, and with it came the weapons — not just guns, but anti-tank missiles, armored vehicles, heat-seeking lasers and artillery — all flooding into an unruly and complex state.

Since then, some of America’s “beautiful military equipment,” as US President Donald Trump once called it, has been passed on, sold, stolen or abandoned in Yemen’s state of chaos, where murky alliances and fractured politics mean little hope for any system of accountability or tracking.

Some terror groups have gained from the influx of US arms, with the barrier of entry to advanced weaponry now lowered by the laws of supply and demand. Militia leaders have had ample opportunity to obtain military hardware in exchange for the manpower to fight the Houthi militias. Arms dealers have flourished, with traders offering to buy or sell anything, from a US-manufactured rifle to a tank, to the highest bidder.

And Iran’s proxies have captured American weapons they can exploit for vulnerabilities or reverse-engineer for native production.

‘Do you have American guns here?’

Arms markets are illegal in Yemen, but that doesn’t stop them operating openly in this large, mountainous city in the country’s southwest.

To one side hang veils, abayas and colorful dresses for sale; to the other are pistols, hand grenades, and US assault rifles available on special order.

In one arms market, sweets were displayed among the ammunition. “Do you have American guns here?” CNN asked. “The American guns are expensive and sought after,” the weapons trader replied, in an exchange captured by undercover CNN cameras.

In another of the city’s markets, a very young-looking boy handled weapons like an expert. Men joked and chewed khat, a commonly used drug, and the atmosphere was casual. But these shops don’t just take individual orders, they can supply militias — and it’s this not-so-hidden black market that in part is driving the demand for hi-tech American weapons and perpetuating the cycle of violence in Yemen. 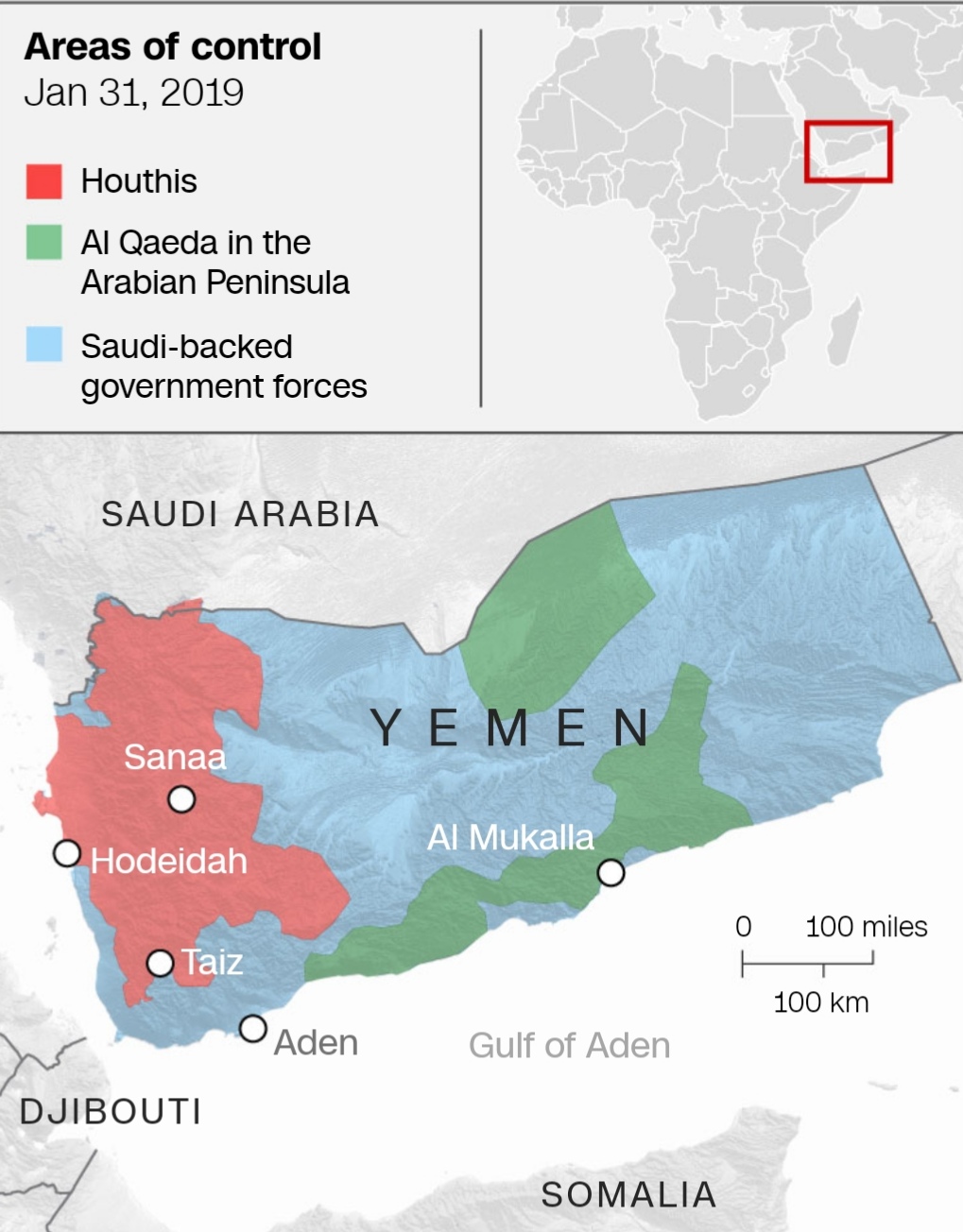 Once the intellectual heart of the country, Taiz is now a tinder box that set off a war within a war last year, when the various militias backed by the Saudi-led coalition turned their guns on each other.

Amid the chaos of the broader war, al Qaeda in the Arabian Peninsula (AQAP) made its way to the frontlines in Taiz in 2015, forging advantageous alliances with the pro-Saudi militias they fought alongside.

One of those militias linked to AQAP, the Abu Abbas brigade, now possesses US-made Oshkosh armored vehicles, paraded in a 2015 show of force through the city.

Abu Abbas, the founder, was declared a terrorist by the US in 2017, but the group still enjoys support from the Saudi coalition and was absorbed into the coalition-supported 35th Brigade of the Yemeni army.

And there are deadlier forms of weaponry that have made their way into the city. In October 2015, military forces loyal to the government boasted on Saudi- and UAE-backed media that the Saudis had airdropped American-made TOW anti-tank missiles on the same frontline where AQAP had been known to operate at the time.

Local officials confirmed that the airdrop happened, but CNN’s attempts to conduct further interviews were blocked and the team was intimidated by the local government. A local activist joked that the weapons had probably been sold on.

Graveyard of US military hardware

At a graveyard of discarded US-made military hardware near the flashpoint port city of Hodeidah, it becomes clear that the Alwiyat al Amalqa — the Giants Brigade, a predominantly Salafi, or ultra-conservative Sunni, militia — is a favored faction.

Nearly half a dozen Mine-Resistant Ambush Protected (MRAP) vehicles sit side by side, most bearing stickers with the insignia of the Giants Brigade.

One even has the export label on it showing it was sent from Beaumont, Texas to Abu Dhabi, in the UAE, before ending up in the hands of the militia. The serial number of another MRAP reveals it was manufactured by Navistar, the largest provider of armored vehicles for the US military.

The armored all-terrain vehicles are built to withstand ballistic arms fire, mine blasts and improvised explosive devices (IEDs). “It’s the vehicle that every crew wants when they’re out in the field,” Navistar’s website says. The firm declined to comment on this report.

Recipients of US weaponry are legally obligated to adhere to end-use requirements which prohibit the transferring of any equipment to third parties without prior authorization from the US government. That authorization was never obtained.

The Saudi coalition did not respond to multiple requests for comment. A senior UAE official denied “in no uncertain terms that we are in violation of end-user agreements in any manner.”

The Giants Brigade is a “part of Yemeni forces,” the official told CNN, adding that the group was under the direct supervision of the UAE and, therefore, the equipment was in the “collective possession” of the coalition.

The US Department of Defense, when asked specifically about the Giants Brigades, said it had not given Saudi Arabia or the UAE permission to hand over US weaponry to other factions on the ground.

“The United States has not authorized the Kingdom of Saudi Arabia or the United Arab Emirates to re-transfer any equipment to parties inside Yemen,” Pentagon spokesman Johnny Michael told CNN. “The US government cannot comment on any pending investigations of claims of end-use violations of defense articles and services transferred to our allies and partners.”

Because a majority of American troop deaths in Afghanistan and Iraq are caused by IEDs, it is critical that knowledge of MRAP vulnerabilities does not fall into enemy hands.

But it’s already too late.

In September 2017, a Houthi-run TV channel broadcast images of Mohammed Ali al-Houthi, the de facto rebel leader, proudly sitting behind the wheel of a captured US-made MRAP in the capital Sanaa, as a crowd chanted “death to America” in the background. 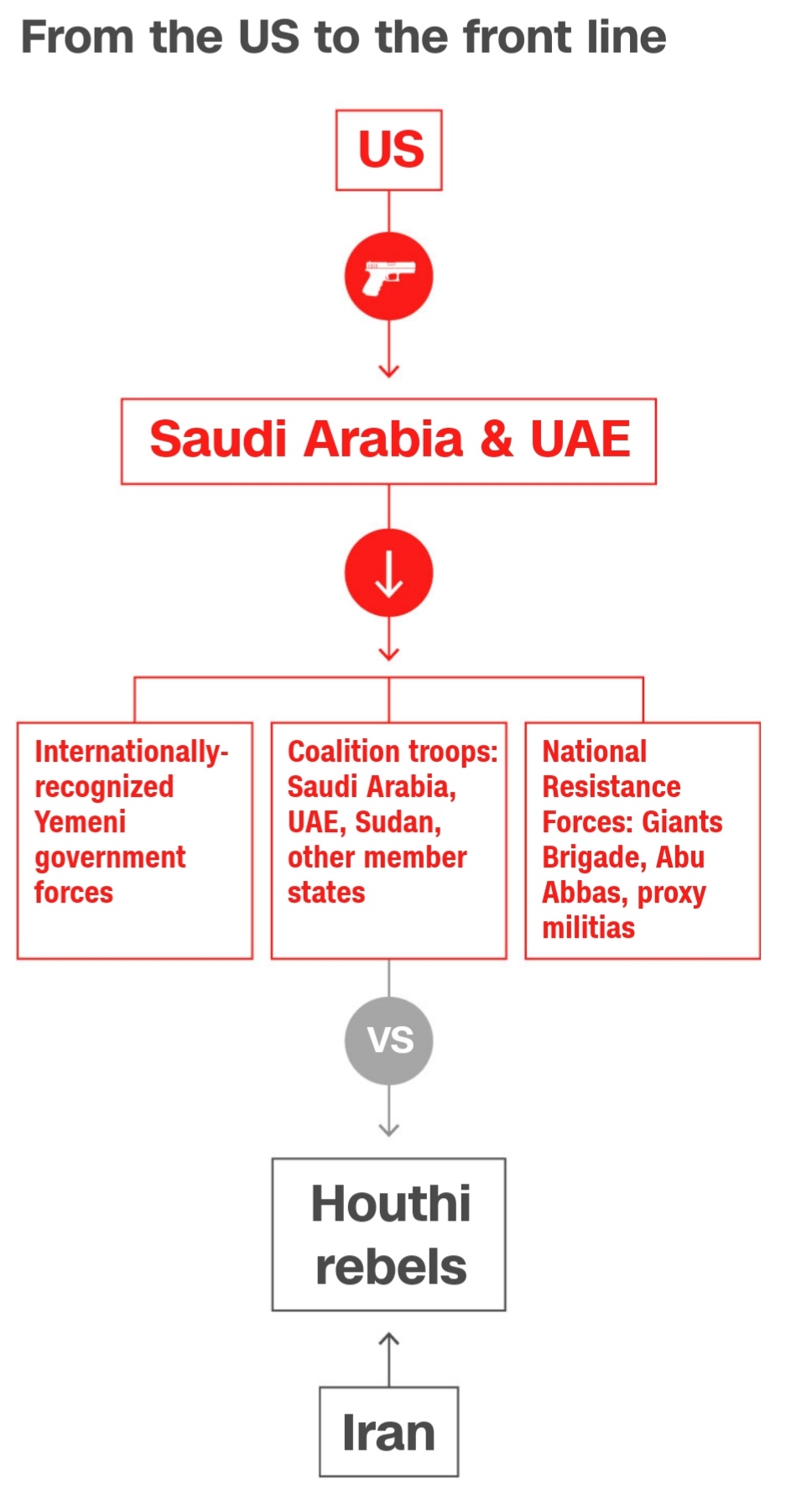 CNN obtained an image showing the serial numbers of a second American MRAP in the hands of another senior Houthi official last year in Hodeidah.

The vehicle was part of a $2.5 billion sale to the UAE in 2014. The sale document, seen by CNN, certifies that “a determination has been made that the recipient country can provide the same degree of protection for the sensitive technology” as the United States.

MRAPs like these, captured on the battlefield, have been probed by Iranian intelligence, according to a member of a secret Houthi unit backed by Iran known as the Preventative Security Force. The unit oversees the transfer of military technology to and from Tehran.

The member of the force, speaking to CNN anonymously out of fear for his safety, revealed that Iranian and Hezbollah advisers have already gotten their hands on the armored vehicles and other US military hardware.

“Iranian intelligence are assessing US military technology very closely,” the source said in an audio interview done from Sanaa. “Listen, there isn’t a single American weapon that they don’t try to find out its details, what it’s made of, how it works.”

The serial numbers of one MRAP captured by Houthi forces trace the vehicle back to a $2.5 billion US arms sale to the UAE in 2014.

IEDs are now mass-produced in Yemen by Houthi forces on a scale only previously achieved by ISIS, according to a report published by Conflict Armament Research.

The group tracks weapons and their supply chains in conflict zones, and has found IEDs containing Iranian components in Yemen.

Hiram Al Assad, a member of the Houthi Political Council, confirmed to CNN that the MRAPs were still in Houthi hands but denied the existence of the Preventative Security Force.

Iran has not responded to a CNN request for comment.

The flood of US weaponry is fueling a conflict that has killed tens of thousands — among them children on school buses and families fleeing violence — and pushed millions more to the brink of famine.

Two-year-old Rehab is so severely malnourished that her chest has collapsed into a deep dent at the center of her tiny body.

There are an estimated 200 cases of malnutrition like hers in the village of Tohta, a frontline area surrounded by artillery and mortar positions on the Red Sea coast near Hodeidah.

A few months ago, the local clinic was shut down due to political disagreements over funding. But Dr. Fatma Ibrahim won’t give up.

She conducts house-to-house visits every week, and as soon as she steps into the street, worried parents flock to her.

“Look, look,” one father demands as he shows the doctor his skeletal 14-month-old girl, Roula. Ibrahim gently examines her, but soon it’s time to move on to the next baby.

For a young man, joining a fighting faction is one of the few means of finding employment in a poor country with little infrastructure and a barely functioning economy.

At the same time, too many powerful political figures and key armed actors in the region have been prospering greatly from the conflict and, as a result, they lack the incentives to agree to a peace process that would threaten their financial gain.

The US is by far the biggest supplier of arms to both Saudi Arabia and the United Arab Emirates, and its support is crucial to the Saudi-led coalition’s continuing war in Yemen.

US lawmakers are trying to pass a resolution ending the Trump administration’s support for the coalition. But there is scant evidence that the White House wants to listen, despite evidence that the actions of a key US ally may be making Americans less safe.

In the wake of the murder of Jamal Khashoggi murder last year, Trump said it would be foolish for the US to cancel multi-billion dollar arms deals with the Saudis. “I don’t want to lose all of that investment being made into our country,” he said.