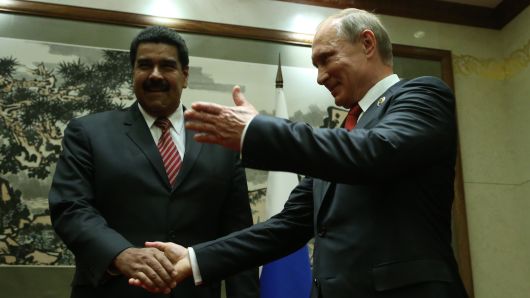 A new front in geopolitical tensions between the U.S. and Russia has opened in Venezuela, with both now declaring their support for rival leaders President Nicolas Maduro and the self-proclaimed interim president Juan Guaido.

Experts are now drawing parallels between the contest for influence over Venezuela’s political and economic future with the battle over regime change in Syria in recent years.

Russia gave its military, financial and diplomatic support to controversial President Bashar Assad in a complex civil war that started in 2011. Meanwhile, the U.S. and its Western allies backed regime change and various rebel groups looking to oust Assad from power — although all sides were fighting in an uncomfortable alliance against the so-called Islamic State.

The civil war in Syria was largely seen as a battle for influence in the Middle East, with Russia keen to not see another regional ally come under America’s sphere of influence. Russia is now largely credited with keeping Assad in power.

Now, there is a battle for the leadership in oil-rich Venezuela with the U.S. backing regime change under opposition leader Guaido, who declared himself president last week, and Russia supporting socialist dictator Maduro.

“That became a frozen conflict once the Russians intervened, but they had a (military) base there (in Syria) and so that was a key strategic, military asset that the Russians wanted to protect,” she said.

“The question here is whether Venezuela constitutes the same type of asset for the Russians,” Croft said. “Apparently they’ve sent their military contractors down there, they’ve lent Venezuela a tremendous amount of money … I would argue that the Russians will be critical … how much financial support do they give to Maduro going forward?,” she said.

The prospect of a military conflict in Venezuela has also been raised after reports that the U.S. and Russia were both sending reinforcements to shore up both claimants to the presidency.

On Monday, a photo emerged of U.S. National Security Advisor John Bolton’s notebook which had a written message to send 5,000 troops to Colombia, which borders Venezuela. The Kremlin also denied Monday that it had sent as many as 400 private military contractors to Venezuela to back Maduro.

Win McNamee | Getty Images News | Getty Images
National Security Advisor John Bolton with that notebook as he listens to questions from reporters during a press briefing at the White House January 28, 2019 in Washington, DC. During the briefing, economic sanctions against Venezuela’s state owned oil company were announced in an effort to force Venezuelan President Maduro to step down.

Croft didn’t think a military conflict was wanted by either side. “Trump talks a big game in terms of U.S. power but does he really want to get caught in a military conflict in Venezuela? Sanctions are the first step … but they’ve certainly left the door open to something more serious.”

Last week, Guaido named himself interim president after street protests against Maduro. The U.S. recognized that claim and has been encouraging support for regime change in the country. Meanwhile, Maduro found allies in Russia, China, Syria and Iran, as well as Turkey and Mexico, who rejected Guaido’s claim to power.

“Not only did Venezuela’s transformation into a country with two presidents set the stage for civil conflict; it also underscored growing divisions between world powers,” analysts at the Washington-based ClearView Energy Partners said in a note Monday.

“While it may be too soon to view these globally bifurcated support bases — capitalists and conservatives vs. strongmen and socialists — as preliminary team rosters of the next great conflict, it does seem appropriate to ask when and how the confrontation within Venezuela might end,” they noted.

Maduro’s staying power, and the continuing loyalty of military leaders, seems likely to be a direct function of the regime’s ability to maintain funding for government operations, the analysts noted.

Hitting where it hurts

Cutting off the government’s funding is exactly how the U.S. administration is aiming to pressure Maduro. On Monday, it imposed sanctions on the country’s energy sector including PDVSA, whose U.S. subsidiary Russia has a stake in.

Russia has also given Venezuela financial lifelines, which are still being paid back, and sells arms to the socialist-run state, according to Reuters. 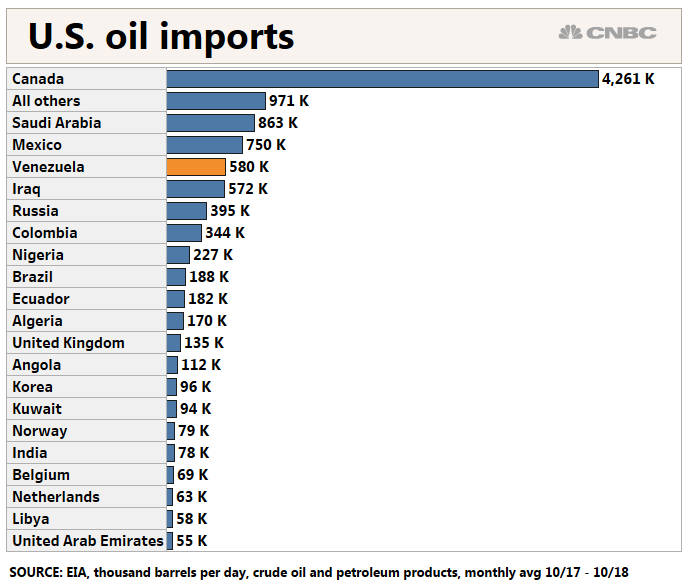 Russia and China hit back at the sanctions on Tuesday, calling them illegal and unfair. How far Russia could go to protect its interests in Venezuela — and whether it could provide more financial and military aid to Maduro — is what is being watched.

“So, the question is are they going to potentially do what they did in Syria and provide the lifeline like they did with Assad or are they going to try to find new in-roads with new partners in order to make sure they keep their acreage in the country and influence there.”