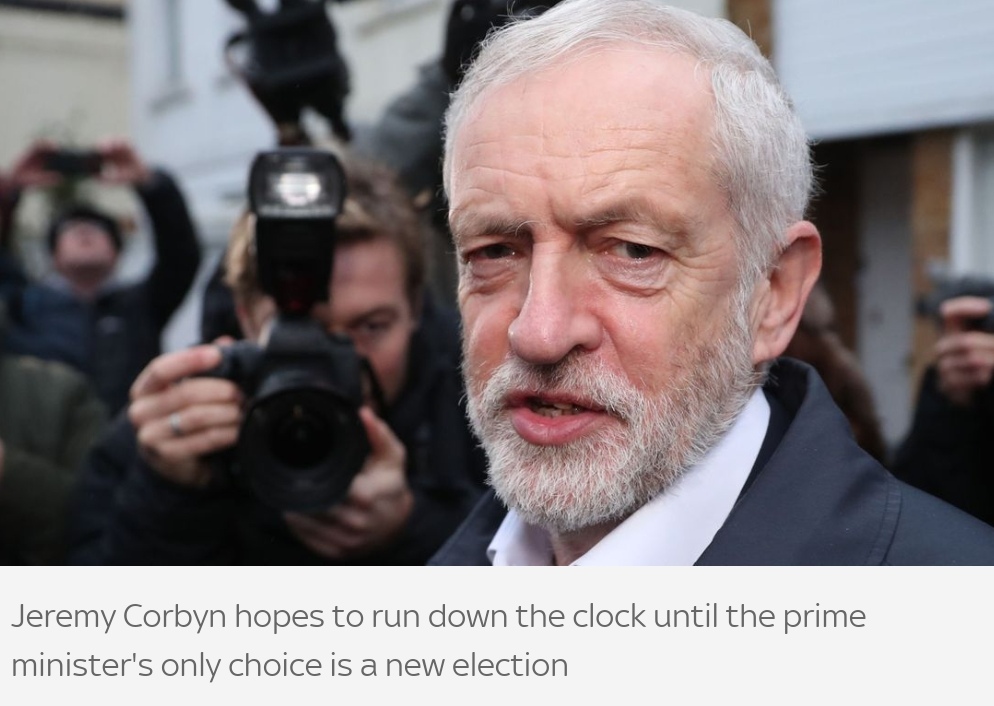 Only three have succeeded in ejecting an administration in the last 120 years, and the result of this one was never really in doubt.

It’s why Jeremy Corbyn didn’t want to call it in the first place. Not least because it means he will now come under relentless pressure to move on to the next stage of Labour’s Brexit policy.

Back in September, the Labour Party, after considerable internal wrangling, adopted a position at its party conference which just about satisfied most.

First, it was decided, the party would do all it could to secure a general election, probably through a confidence vote. If that proved not to be possible, “other options” would be considered, including the possibility of a new referendum with Remain on the ballot.

As far as the proponents of a so-called “People’s Vote” are concerned, the possibility of a general election has now been exhausted and the party must go on to prosecute a new referendum.

But Mr Corbyn and his top team disagrees. I’m told by a source close to the leadership that they will try a confidence vote at least once more, when the prime minister’s plan has become known.

If, they reckon, it becomes clear that the prime minister has no plan B, cross-party talks breakdown and “no deal” looks likely, perhaps the arch-Remainer Tories might peel away, abstain in a motion of confidence and Mr Corbyn might have a chance to form a government.

I’m also told that Mr Corbyn is extremely unlikely to back another referendum any time soon. They will not abandon seeking an election as Brexit is likely the only opportunity to force one until 2022. That’s a long march ahead.

Secondly, I’m told there’s genuine concern of shadow cabinet walkouts and a backbench rebellion. Scores of Labour MPs represent Leave seats and many are sceptical about any such a move.

These are genuine structural problems of uniting the Labour coalition of metropolitan uber-Remainers and post-industrial Leavers with which any Labour leader would have to grapple.

I’m not convinced that up to this point at least, a different leader – an Andy Burnham or Yvette Cooper – would have behaved much differently. But thanks to Mr Corbyn’s eurosceptic past, he has little credit in the bank of the parliamentary Labour Remainers. They suspect he is a Brexiter in Remainer clothing.

I suspect this is somewhat unfair, though the truth may be even more damning. Mr Corbyn might have no love for the EU, be deeply sceptical of it, but it is not a cause which occupied much of his political career. He was not a Labour Bill Cash or John Redwood, obsessed with all matters European, committing himself to “freeing” Britain of the EU’s yolk.

Although he voted against virtually every European treaty, he barely mentioned the subject in parliament before he became leader. As source after source has told me time again, the truth is, it is not an issue which exercises Mr Corbyn much, he’s largely uninterested and wishes it would go away so he could focus on other priorities.

Thus Brexit is not, as for some of his colleagues, part of his socialism. It is therefore an issue to be managed to maximum political utility, a matter of head not heart. This, perhaps more than anything else, is the ultimate sin for his enemies, so much more attached to the EU than he.

Mr Corbyn will not back another referendum unless he has absolutely no choice. By way of illustration, look at his actions on Wednesday evening: refusing to engage with the prime minister’s cross-party talks on Brexit until she takes no deal off the table, which he knows she will not.

He hopes, I’m sure, to run down the clock until the prime minister is out of options, save for one: a new election. For Jeremy Corbyn, Brexit will always remain just that – his best (but most perilous) electoral opportunity.

Billionaire Democrat Tom Steyer, who has pushed for Trump’s impeachment, won’t run for president in 2020. To know more electionsobserver.com