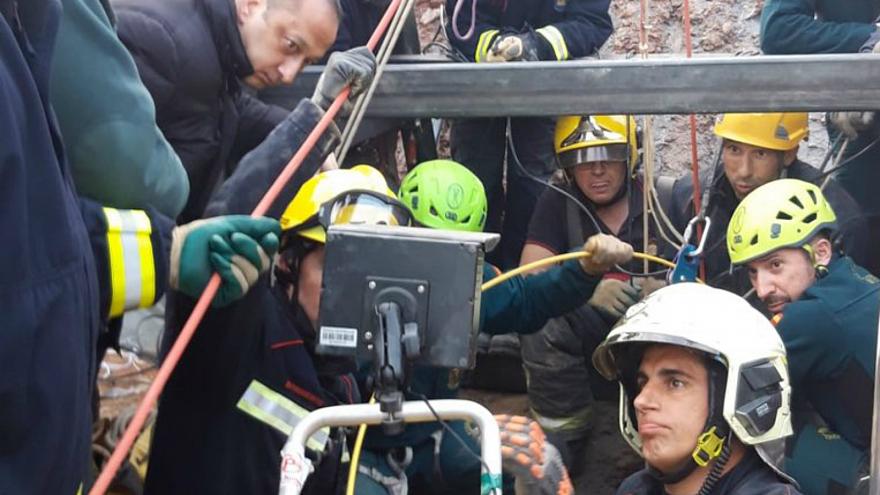 An enormous search and rescue operation to find a toddler who fell down a borehole in Malaga, Spain, entered its third day on Wednesday.

Julen, 2, was reported to have been out walking with his family in the small town of Totalan in Malaga on Sunday afternoon when he fell down the narrow 107-metre-long hole, prompting a large search operation.

Julen hasn’t been seen or heard from since.

Authorities were quoted in Spain’s Cadena SER news outlet on Wednesday morning as saying hair had been found in the borehole, with DNA tests confirming it belonged to the toddler.

More than 100 people from across several specialist teams have been deployed to help in the ongoing search.

However, after several days of searching, rescuers were no closer to finding the boy.

The official Twitter account for emergencies in Spain’s Andalucia region said rescuers were “working tirelessly”, but had no news on the whereabouts and wellbeing of the child.

Andalucia’s Civil Guard tweeted on Monday afternoon saying that work was underway to remove earth around the borehole to trial a new method of access.

By Tuesday morning, rescuers began to open a horizontal access route into the hole.

Spain’s president, Pedro Sanchez, said in a tweet late on Sunday that he was hoping “for the best outcome” for Julen and his family.

“I share the anguish of the family of the little 2-year-old who has fallen into a well in Totalan,” he wrote. “Let’s keep hoping for the best outcome.”

Malaga firefighter Antonio Avila told local news outlet Malaga Hoy on Monday that the rescue operation was particularly complex due to the narrow shaft, worries over collapsing walls, and because there had been no sighting of Julen since the initial incident at the weekend.

“The problem is because it’s a vertical hole, even if you enter, you would have to do so face down, and in such a long pit, there is no possibility that someone can go this far upside down,” he said.

“Possibilities are always there,” he told Malaga Hoy. “But of course, [more than] twenty hours have passed… with cold.”

However, Julen may be safe “if the child has stayed under a layer of mud and there is an air pocket… there have been other cases in the event of earthquakes or in natural disasters in which this miracle has occurred.”