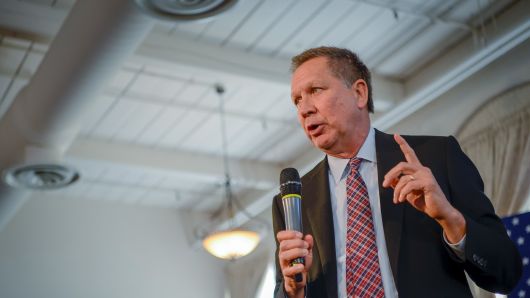 Republican John Kasich is joining CNN as a senior political contributor after eight years as Ohio’s governor – and as he thinks about making another run at the White House.

Kasich, one of the most outspoken GOP critics of President Donald Trump, had been signalling to advisors and donors that he’d like to join either CNN or MSNBC, as CNBC first reported on Monday. His team and sources close to him insisted that even though he’s joining a TV network, he’s still considering running for president in 2020.

In fact, Kasich is planning to go on a West Coast swing this week to meet with donors and business leaders, including traveling to Los Angeles and parts of Silicon Valley, according to a person with direct knowledge of the matter.

CNN announced that Kasich would be joining the network as a contributor Tuesday morning. Kasich’s chief political strategist, John Weaver, commented on the development to CNBC.

“This is a strong platform for the governor to continue to offer his positive vision to the country and engage on the vital issues facing America,” Weaver said. Weaver himself appears as an analyst on NBC News and MSNBC.

Kasich will be appear across most of CNN’s platforms and will make his debut on Chris Cuomo’s show Tuesday night.

Kasich also signed with talent management firm United Talent Agency on Monday. The decision to sign with the group comes after The Daily Beast reported in October that Kasich met with CNN president Jeff Zucker and MSNBC president Phil Griffin. During the meeting with Zucker, he was reportedly accompanied by Jay Sures, UTA’s president.

Kasich has been a staunch critic of Trump’s administration. The former Ohio governor and has made several appearances on CNN in the past, often criticizing the president for his tariffs and hard-line trade policy, as well as his border wall proposal, among other issues.