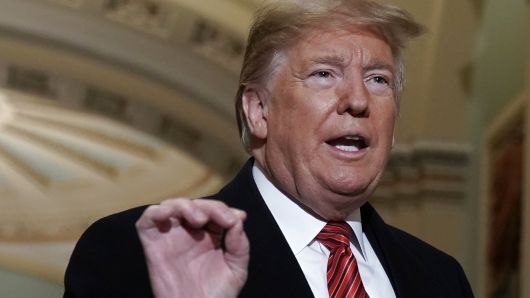 President Donald Trump promised to hold firm to his border wall pledge Thursday morning ahead of a trip to a Texas town near the boundary between the U.S. and Mexico.

As a partial government shutdown entered its 20th day, the president showed no signs of relenting on his promise to secure more than $5 billion to build the barrier. In a string of tweets in part responding to a morning television host, Trump said “I won’t” cave on the wall demand.

The message comes as talks to reopen nine federal departments crumbled Wednesday afternoon. Trump walked out of a meeting with House Speaker Nancy Pelosi and Senate Minority Leader Chuck Schumer after the top U.S. representative rejected his request for border wall money. The breakdown has massive stakes for the hundreds of thousands of federal workers who will start to miss paychecks Friday if lawmakers fail to fund the government.

Trump will travel to McAllen, Texas on Thursday morning to draw attention to what he claims is a “humanitarian crisis” at the southern U.S. border. The president has used horrific tales of murder and drug abuse to make his case for a wall — prompting Democrats to accuse him of fear mongering for political purposes.

Trump has teased the possibility of declaring a national emergency to build the border barrier without congressional approval. On Thursday, he argued he has an “absolute right” to do so, but the move would likely face a swift challenge in the courts. He could potentially use the journey to McAllen, a busy border area, as part of his justification for the action.

“If [a deal with Congress] doesn’t work out, probably I will do it. I would almost say definitely,” Trump said of declaring a national emergency as he left the White House for Texas.

A quick resolution appears hopeless as Republicans and Democrats entrench. Democrats want the Senate to approve House-passed measures to temporarily reopen the government — without wall money — and allow border security talks to continue. Trump has threatened to veto the proposals, and the GOP-held Senate has pledged to oppose anything the president refuses to sign.

A few Republican senators have said they would support legislation to reopen the eight departments other than Homeland Security to secure pay for the vast majority of federal workers. After Trump attended a Senate GOP caucus meeting Wednesday, the president and Senate Majority Leader Mitch McConnell aimed to show a united front behind Trump’s border wall demands.

In a tweet Thursday morning, Trump contended “there is GREAT unity with the Republicans in the House and Senate.”

As any semblance of talks collapsed Wednesday, the shutdown fight increasingly turned into a battle of rhetoric. Schumer said the president threw a “temper tantrum” during the White House talks and slammed his fist on the table.

As the shutdown drags on, Pelosi and Schumer have increasingly turned the focus to federal workers who will start to miss paychecks during the closure. About 800,000 U.S. employees are either furloughed or working without pay during the shutdown.

Schumer plans to speak Thursday morning to urge Senate Republicans to hold a vote on the House-passed spending measures.

“If Leader McConnell or Republicans object, thousands of federal workers—and the families who rely on them—will go without a paycheck,” he said in a tweet.

Asked Thursday about the workers who will suffer from the shutdown, Trump instead questioned whether Democrats care about crime or murders that he tied to illegal immigration. He again claimed many federal workers agree with his stance on the shutdown — even though U.S. employee unions have decried the government closure.