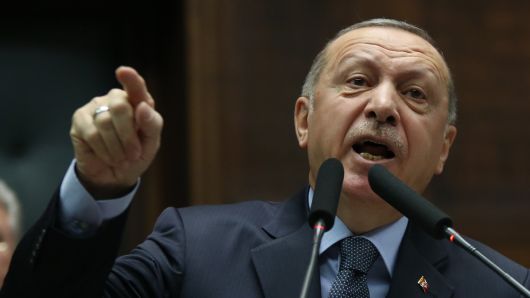 Turkey’s Erdogan shuts down White House’s Bolton on Syria, says he made a ‘serious mistake’

“We cannot accept Bolton’s messages given from Israel,” the Turkish president said, adding that Bolton made a “serious mistake,” Reuters reported.

He was referring to statements by the senior Trump administration official, made from Israel over the weekend, promising safety for the U.S.-allied Kurdish militias — who dominate areas in Northern Syria and whom the Turks view as terrorists — in the event of a U.S. military withdrawal.

The militias, known as the Kurdish People’s Protection Units (YPG), are the armed wing of the Democratic Union Party (PYD), an offshoot of the designated terrorist group called the Kurdistan Workers Party, which has carried out a decades-long insurgency against the Turkish state. They’re also America’s primary partners on the ground in Syria: The Pentagon has been supplying the YPG with weaponry, air support and training to battle IS since 2015, and the militias have suffered thousands of casualties fighting for the U.S.-led coalition.

Erdogan stressed that the YPG and the PYD cannot be representative of Kurds, adding that Bolton “probably doesn’t know” who the two groups are. He also described Turkey as facing a “critical juncture” in Syria, with whom it shares a 500-mile border.

Ankara has for months threatened a military offensive against the Kurds in northeastern Syria, refusing to view their presence as legitimate. That threat has been made all the more real since President Donald Trump’s shock announcement on Dec. 19 to quickly withdraw all U.S. forces from Syria, a move met with torrents of criticism from security experts and lawmakers alike. Trump, defending his decision, emphasized the need for other countries to take on the battle against IS in Syria and espoused Turkey’s subsequent offer to fill America’s shoes. Critics say this will primarily mean Turkish violence against the Kurds.

The YPG, widely seen as Washington’s most effective local partner in the fight against IS, sees the move as leaving them open to Turkish assault. In a bid to reassure allies of Washington’s commitment, Bolton and Secretary of State Mike Pompeo have been touring Middle Eastern capitals this week expressing their will to protect the Kurds and continue combating IS.

“We don’t think the Turks ought to undertake military action that’s not fully coordinated with and agreed to by the United States at a minimum, so they don’t endanger our troops,” Bolton said Sunday in Israel. He added that Turkey must “meet the president’s requirement that the Syrian opposition forces that have fought with us are not endangered.”

Ankara and Washington at loggerheads

Given Erdogan’s sharp rebuttal, this requirement may prove very difficult to meet.

“Both Bolton and Pompeo are clearly trying to make the best of a difficult situation for them given Trump’s surprise decision around withdrawing troops from Syria,” he told CNBC on Tuesday. Just last September, Bolton pledged that the U.S. would stay in the war-torn country as long as adversary Iran remains active there.

“Neither Bolton nor Pompeo’s comments seemed particularly sensitive to Turkey’s sensitivities,” Ash said, “and I think Erdogan was responding to this.”

U.S. support for the Kurds in Syria has been a major point of contention between Ankara and Washington. Relations between the two NATO allies have been rocked by turbulence in the past few years over Syria policy, U.S. sanctions on Iran, trade tariffs, Erdogan’s warming relationship with Moscow, and the Turkish detention of an American pastor, who was released in October.