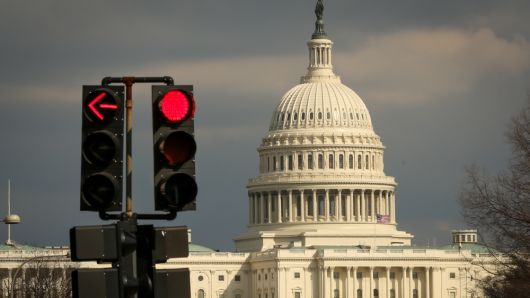 Democrats will unveil on Friday their sweeping effort to revamp the nation’s campaign finance and voting rights laws, measures that could bring significant changes for corporate America and social media companies.

The House bill, titled The For the People Act, will be designated HR1, signifying its place at the top of the Democrats’ agenda. Rep. John Sarbanes, D-Md., the bill’s lead author and chairman of the Democracy Reform Task Force, said the proposal is designed to hold elected officials accountable and make government more responsive.

The bill is a “once-in-a-generation reform package that will end the dominance of big money in our politics, ensure that public servants actually serve the public and make it easier, not harder, to vote,” Sarbanes said in a statement. “Once we clean up Washington and get special interests out of the way, we can get to work on a whole host of important issues that Americans care about.”

Now that they control the House, Democrats could pass their bill on a party-line vote. But it stands little hope in the Senate, where Republicans maintain a majority. Still, the proposal is a conduit for Democrats’ outrage over accusations of voting abnormalities in hotly contested midterm elections and frustration over Russian interference in the 2016 presidential election. That has translated into attacks on tech giants like Facebook and Google over foreign infiltration of their networks.

The legislation would require large digital platforms to create a database of requests to buy political ads worth more than $500. They would also have to implement measures to prevent foreign nationals from directly or indirectly purchasing ads. The proposals are drawn from a bill sponsored by Democratic Sen. Mark Warner of Virginia, among others, that put Facebook, Twitter and Google in the crosshairs.

Facebook and Twitter have come out in support of that legislation, known as the Honest Ads Act.

HR1 would also increase transparency surrounding political spending. Companies that hold contracts with the federal government would have to disclose all contributions or ad buys. The Securities and Exchange Commission would be able to finalize rules allowing shareholders to request information on political spending by publicly traded companies. And corporate executives would have to make purchases of political ads public.

“Short of a constitutional amendment or a new Supreme Court, the area where you can actually have impact or make a difference is really in disclosure,” said Chris Lu, a senior fellow at the University of Virginia’s Miller Center who worked in the Obama administration.

In addition, the bill would ban political contributions and expenditures from companies with “significant” foreign ownership or control. Also, members of Congress would be barred from serving on corporate boards.

The wide-ranging proposal takes a swipe at President Donald Trump’s refusal to release his personal tax returns. The bill would require presidential and vice presidential candidates to disclose 10 years worth of filings.

House Democrats have said they plan to force Trump to turn over his tax records once they are in power, though they have not set a timeline for that request and it’s unclear whether they could be made public. On Thursday, Sen. Ron Wyden, D-Ore., re-introduced a bill that would mandate Trump release his three most recent years of returns to the Office of Government Ethics.

“This legislation is the one-two punch needed to keep the Trump administration from stonewalling congressional oversight efforts, and ensure public transparency if Trump’s tax returns get tied up in court,” Wyden said in a statement.