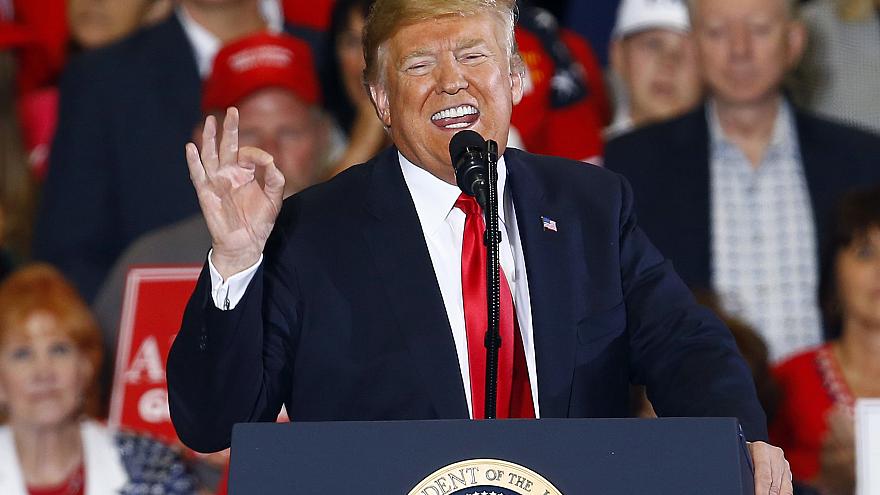 Only in Donald Trump’s Washington is a looming government shutdown not the lead political story in America today — but just one of several chaotic events in the last 24 hours.

The federal government is hurtling towards a government shutdown tonight after the U.S. House passed a spending measure containing more than $5 billion for Trump’s border wall that the U.S. Senate doesn’t have the 60 votes to pass.

Oh, and NBC’s Pete Williams and Ken Dilanian reported last night that special counsel Robert Mueller is expected to issue his confidential report on his Russia probe to the attorney general as early as mid-February

As we’ve said before, much of the public and the political world have become numb to all of the chaos in Washington. Earlier this month, the president’s former lawyer/fixer was sentenced to three years in jail; Trump got rid of his second chief of staff and replaced him with an acting third; and a judge delayed sentencing of the president’s first national security adviser. But after yesterday’s events, we’ve now reached DEFCON 2 on our readiness chart of political chaos – one step away from total chaos.

What’s been particularly striking is how Senate Republicans have split from Trump this week — on his decision to withdraw U.S. troops from Syria, by passing a clean continuing resolution to keep the government open and on Mattis’ resignation. Here was Senate Majority Leader Mitch McConnell: “I am particularly distressed that [Mattis] is resigning due to sharp differences with the president on these and other key aspects of America’s global leadership.”

And we’ll leave you with this thought: On Thursday, Vladimir Putin cheered Trump’s decision to withdraw U.S. troops from Syria, and the secretary of defense resigned.

That’s where we are.

The constant dysfunction from House Republicans from 2011 to 2018: If there’s been one constant over the last eight years — in the Obama or Trump presidencies — it’s been the dysfunction from House Republicans in control of that chamber. There was the debt-ceiling standoff of 2011. The fiscal-cliff fight in 2012. The government shutdown of 2013. The sequester. Now this looming shutdown before Christmas.

Sure, Republicans can point the finger at Obama over the debt-ceiling standoff. Blame the 60-vote standard in Senate. And, yes, President Trump has his fingerprints all over the current chaos. But the central culprit here over the last eight years has been the House GOP — whether led by John Boehner or Paul Ryan.

Trump says Democrats will own a shutdown, but that’s not what he said 10 days ago

Already this morning, President Trump has tweeted TEN times about his border ball and a potential government shutdown. Here’s one of them: “Senator Mitch McConnell should fight for the Wall and Border Security as hard as he fought for anything. He will need Democrat votes, but as shown in the House, good things happen. If enough Dems don’t vote, it will be a Democrat Shutdown! House Republicans were great yesterday!”

But remember, here’s what Trump said in his December 11 meeting with Nancy Pelosi and Chuck Schumer: “I’m going to shut it down for border security.”

Trump also tweeted this morning about the House GOP’s passage of their spending measure containing $5 billion for his wall: “No matter what happens today in the Senate, Republican House Members should be very proud of themselves. They flew back to Washington from all parts of the World in order to vote for Border Security and the Wall. Not one Democrat voted yes, and we won big. I am very proud of you!”

And he called on Mitch McConnell to end the filibuster to get his border wall: “Mitch, use the Nuclear Option and get it done! Our Country is counting on you!”

But there hasn’t been one tweet from Trump this morning on Mattis’ resignation — and on what Mattis said in his resignation letter.

NBC News: Mueller is nearing the end of his investigation

“Special counsel Robert Mueller is nearing the end of his historic investigation into Russian election interference and is expected to submit a confidential report to the attorney general as early as mid-February, government officials and others familiar with the situation tell NBC News,” per NBC’s Pete Williams and Ken Dilanian.

“‘They clearly are tying up loose ends,’ said a lawyer who has been in contact with the Mueller team. The sources either did not know or would not say whether Mueller has answered the fundamental question he was hired to investigate: Whether Trump or anyone around him conspired with the Russian intelligence operations to help his campaign.”

Moscow Office Rents on the Rise.