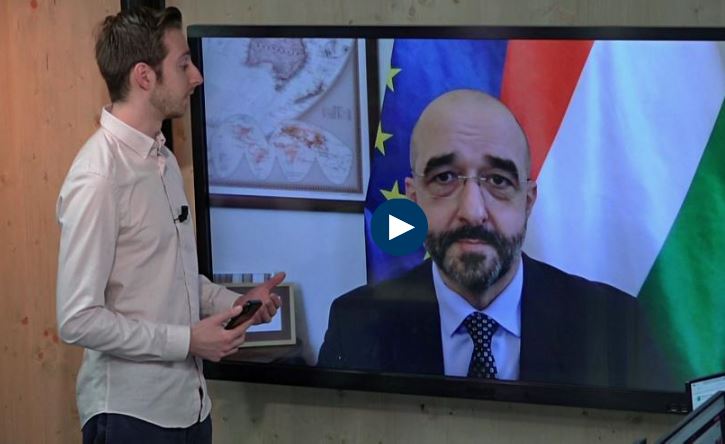 Hungary’s government has used an interview with Euronews to downplay the scale of protests in the country and suggested western media coverage is biased.

About 10,000 people demonstrated in Budapest on Sunday in the largest of four protests held since last Wednesday, according to Reuters.

Dubbed the “slave law” by critics, it will enable employers to ask staff to work up to 400 hours of overtime annually, compared to 250 hours at present.

Protesters also denounced judiciary reform that will create new administrative courts to oversee issues including electoral law, protests and corruption and which will answer to the government.

But in an interview with Euronews, Hungary’s government spokesman Zoltan Kovacs disputed the number of people that had been reportedly demonstrating, arguing that a “couple [of] hundreds, maybe a couple [of] thousands of people have been protesting, depending on the occasion.”

“We shouldn’t mix that up with any kind of popular uprising or popular protests against what is happening in the country,” he added.

Kovacs instead attacked the “western media”, in particular, the Reuters news agency, for “trying to portray what is happening here in Hungary from a completely isolated and tendentious perspective”.

“You have to be very careful when you see the portrayal, the representation of what was and what is happening in Hungary over the past couple of days, from the perspective of western media.

“We always maintain that the proper perspective — and that is not fake news but reality — is always important and obviously the government’s perspective is imperative,” he added.

For Kovacs, the protest amounted to “a political action organised by a fragmented and weak political opposition, which is unsuccessful in parliament because of the very few seats they were able to earn”.

He also dismissed any allegation that the opposition is muzzled by President Viktor Orban’s grip on the executive.

“The opposition has a fair voice and a fair media voice in the country, according to all major polls and available statistics,” Kovacs told Euronews.

“The political opposition has its own alternative possibilities for publicity and advertising their political views.

“Not only in the Leftist liberal media but also in social media and other occasions.

“If you take a proper look and a statistical look at the Hungarian media landscape I would rather suggest that there is an opposition, an overwhelming opposition media and opinion weighted against the government,” he added.

His comments come after about 2,000 people gathered at the state television building on Monday after security guards ejected two independent MPs from the premises.

The two lawmakers — who were among about a dozen members of parliament to spend the night in the building to demonstrate against Orban’s policy — sought to read out a petition on air calling for the withdrawal of the new labour law.

It also demanded an independent public media and courts and for the country to join the European Public Prosecutor’s Office, which is scheduled to come into force in 2020 to investigate and prosecute perpetrators of large-scale transnational crimes including terrorism, money laundering and corruption.

They subsequently labelled state television as a government mouthpiece.

Kovacs rejected the criticism and said the opposition lawmakers “breached the law”.

“It’s a red line that shouldn’t be passed,” he added, suggesting it was a political stunt.

“As we speak, we are approaching a political campaign in which they are trying to find an alternative face [sic] of expressing themselves and coming to light and also enjoying some kind of public attention that wouldn’t be there if it’s about their real programmes,” Kovacs said.

But in a Pulzus poll commissioned by Euronews, two-thirds of respondents agreed with the action taken by opposition MPs at the state television building, with more than 70% saying the MPs should have been allowed to read out their petition.

The representative sample included 600 people between the age of 18 and 60.

A vast majority (78%) think the ordeal will damage the government’s approval while more than half said it will boost the opposition’s popularity.

The protests don’t pose a significant threat to Orban. The controversial right-wing leader was re-elected in April for a third consecutive term after calling for tougher immigration control. He has since been publicly rebuked by the EU for undermining democratic rule.

Hungarians will head to the polls twice in 2019: in May for the European Parliament election and in October for local elections.