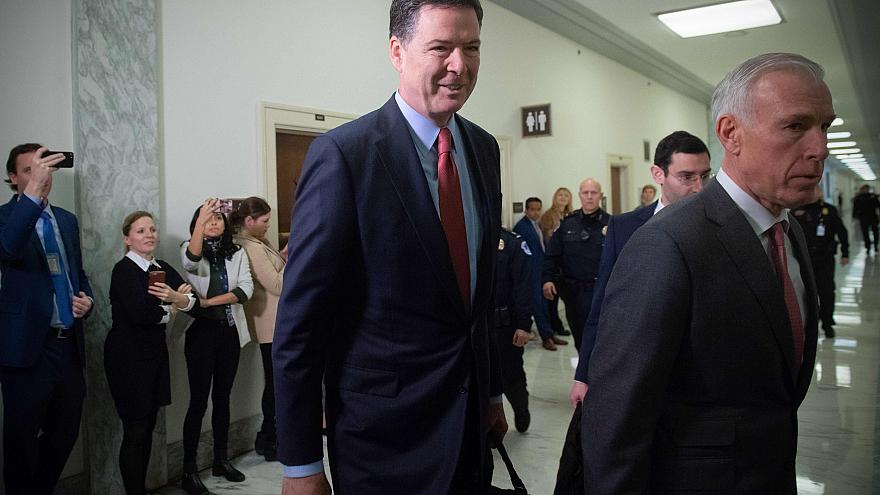 Comey to House Republicans: ‘Stand up and speak the truth’

Speaking after a second round of questioning from lawmakers, Comey again took aim at the GOP-led inquiry and its continued focus on how the FBI handled its investigations into Hillary Clinton’s use of personal email as secretary of state. The bigger concern, he said, was a president who continues take aim at federal law enforcement.

Those Republicans joining Trump in an effort to undermine the FBI will have “to explain to their grandchildren what they did,” Comey said.

“At some point someone has to stand up and in the face of fear of Fox News, fear of their base, fear of mean tweets, stand up for the values of this country and not slink away into retirement, but stand up and speak the truth.”

It seemed a direct rebuke of the Republicans who ran Monday’s inquiry — House Judiciary Committee Chairman Bob Goodlatte, R-Va., and Oversight Committee Chairman Trey Gowdy, R-S.C. Both are leaving Congress at the end of the year after not seeking re-election.

Combined with a previous appearance before the panels two weeks ago Comey spent more than 11 hours on Capitol Hill as part of the probe into the FBI’s decision-making before the 2016 election. As with the last appearance, Republicans agreed to release a full transcript of the proceedings within 24 hours after Comey initially sought to quash a subpoena to appear in private.

In his previous appearance Comey said he would have removed senior DOJ officials Peter Strzok and Lisa Page from their roles as part of the Clinton email probe if he had known at the time about a cache of text messages between the two that showed a bias against Trump. But he later said that nothing in how Strzok handled his work led him to believe he was acting on any personal political beliefs.

Republicans entered Monday’s briefing hoping to press Comey further about his own recent public comments about how the FBI conducted an interview with Michael Flynn just days into his tenure as the National Security Adviser in January 2017.

Rep. Mark Meadows, R-N.C., said there appeared to be a double standard when Flynn was interviewed without lawyers present whereas Clinton did when the FBI interviewed her in the summer of 2016. Flynn has pleaded guilty to making false statements to the FBI about his contacts with Russia.

Meadows also suggested that Comey had misled the committee during his previous testimony about whether he was aware that research tying Trump to Russia that had been included in a secret surveillance warrant application for a Trump foreign policy aide had been funded in part by a law firm affiliated with Clinton’s campaign.

“When you look at his public statements and also the testimony he’s given, those don’t seem to reconcile so we’re gonna give him a chance to hopefully clarify those remarks,” he said.

Rep. Elijah Cummings, D-Md., the incoming chairman of the Oversight Committee, said Republicans were simply acting as “defense counsel for the president.”

Republicans “want to do everything in their power to bring doubt regarding the Mueller investigation. But the truth will come out and we will do our best to make sure that it does come out,” he said.

When he spoke to reporters last week Comey offered praise for William Barr, Trump’s nominee to serve as attorney general. On Monday he was asked if he had confidence in the acting attorney general, Matt Whitaker.