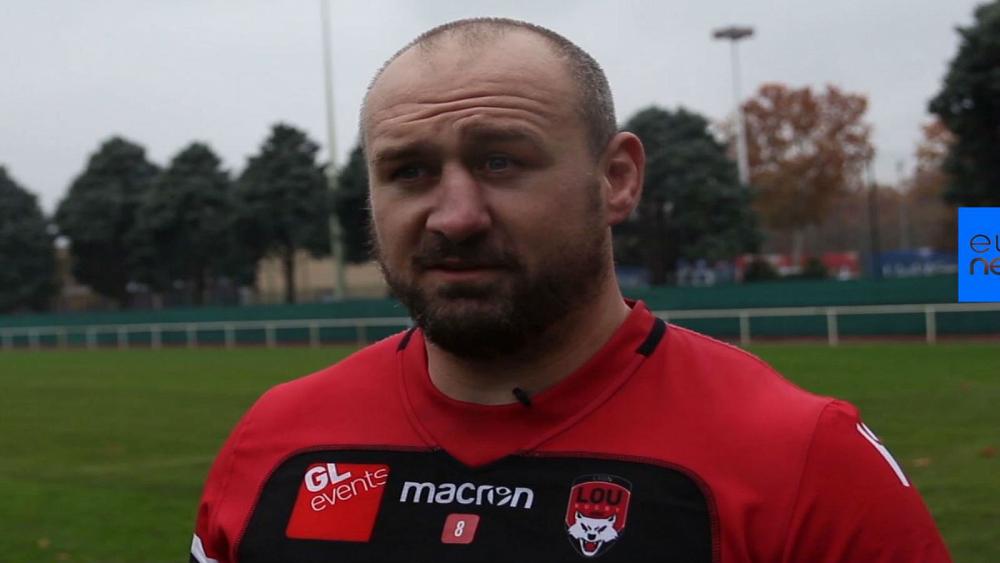 Euronews went along to a training session to ask him how he settled in as an Englishman in France.

Hailing from Liverpool, Fearns unsurprisingly took to football at first. Soon realising that his skills with a spherical ball were not going to set the world on fire, he headed to a local rugby club and took the first steps on the road to success — though he would eventually set himself on fire! More of this later.

Fearns made the move to Lyon in 2015 after 10 seasons in the UK and was initially concerned that it would be difficult for him and his family to settle in a new city, with a different language, and a different style of rugby.

“I always heard that France was very different,” says Fearns, while adding that it was something that he has always wanted to do. He is candid about things not working out at his former club, Bath, in the south west of England, and says he grabbed the chance in a very fitting manner for a rugby player — “with two hands.”

Having never been to Lyon before, the friendly and jovial No. 8 had a certain amount of trepidation, but thankfully, the future held no such terrors.

“When I arrived I was really happy ‘cos it’s a great city, a lot going on,” he says, adding that it was also easy for his wife. “We just fitted in straight away.”

In his first week as a LOU player, his teammates had what Fearns calls “a bit of a soirée.”

They were away on a pre-season training camp when the players from the Pacific Islands decided to give the other lads a taste of home.

“The Islander boys made a big fire to cook a big pig…there was a branch and I tripped over it into the fire.”

“Not my finest moment,” he grimaces.

Despite his family name almost being an anagram of ‘France’, Fearns hasn’t quite mastered the lingo.

“When I speak French they just look at me in bemusement,” he says.

“I feel as though I’m saying exactly the same thing as them,” he laughs. “But I’m obviously not.”

With Brexit looming, many UK citizens living in Europe are concerned about what might happen.

“I don’t think anyone’s sure what’s happening really. The whole thing’s a bit of a shambles with Brexit,” he says.

Brexit isn’t the only thing on the minds of players from other nations, like Fearns. French rugby has, over the last couple of seasons, attempted to promote homegrown players. Indeed, Bernard Laporte, the president of the French Rugby Federation, has been fairly vocal with his strategy to reduce the number of foreign players in top tier French teams. Fearns, along with many others, sees this as hypocrisy.

“Laporte, when he won all his Top 14s and all his championships, he did it with a lot of foreigners,” he says.

Former Wales rugby captain Gareth Thomas was attacked in Cardiff last month. Thomas chose to ask for an apology rather than press criminal charges against the young man who attacked him.

He said he opted for “restorative justice” against the 16-year-old in a bid to send out a positive message.

Fearns saw the story when Thomas put up a message explaining what happened on social media and supported the way he dealt with the situation.

“I think it was good for him, the way he took it…and sat down and spoke to him. I think that was good,” he says.

Fearns believes that the unity within his squad is strong enough that he hopes it would create a safe space for people to be themselves.

“We’ve got a strong enough squad for people to feel that they can be open.”

And just to show his support, he told us he’s going to buy a pair of rainbow laces. The French international side wore them in a game after they heard of Thomas’ attack.

Gasping for a curry

When asked what he misses most about home, he started talking about Fish and Chips but then his memory sparked and he realised that it was, in fact, something that eludes many British people in France, the holy grail of a really good Indian meal.