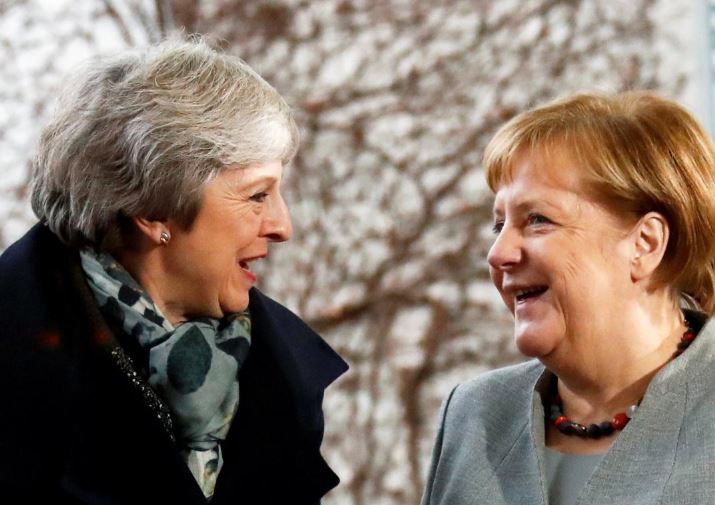 After May asks for help, Germany’s Merkel says no more Brexit negotiations

German leader Angela Merkel ruled out further negotiations on Brexit on Tuesday but said efforts were being made to give Britain reassurances after Prime Minister Theresa May abruptly pulled a parliamentary vote at home because she faced defeat.

With less than four months left until the United Kingdom is due to leave the EU on March 29, May’s Brexit deal is floundering, opening up the prospect of a disorderly no-deal divorce or a reversal of Brexit through a referendum.

A day after pulling the vote in the face of ridicule from lawmakers, May rushed to The Hague for breakfast with Dutch Prime Minister Mark Rutte and then to Berlin to meet Chancellor Merkel before a trip to Brussels.

The message from the EU was clear: It will give assurances but will not countenance reopening the treaty.

According to two sources, Merkel told her conservative parliamentary group on Tuesday that there would be no further negotiations on Brexit though she also said efforts were being made to give Britain reassurances.

According to the sources, Merkel said May had admitted to her that she would not have got a majority in the Commons and it was not in anyone’s interests for Britain to leave the EU without a deal.

As May arrived in rainy Berlin, a hitch with May’s car door briefly trapped her inside, delaying her red carpet handshake with Merkel.

“The deal we achieved is the best possible. It’s the only deal possible. There is no room whatsoever for renegotiation,” European Commission head Jean-Claude Juncker said in an address to the European Parliament in Strasbourg.

The British parliament will vote on a deal before Jan. 21, May’s spokeswoman said. If there is no satisfactory deal by then, parliament will still be given a debate on the issue.

The most contentious issue has been the Irish “backstop”, an insurance policy that would keep Britain in a customs union with the EU in the absence of a better way to avoid border checks between British-ruled Northern Ireland and EU member Ireland.

May’s critics say it could leave Britain subject to EU rules indefinitely. Juncker said neither side intended for the backstop ever to take effect, but it had to be part of the deal.

Germany’s European Affairs Minister Michael Roth said the EU did not want Britain to leave but added that substantial changes to the withdrawal agreement would not be possible.

“Nobody wants the UK to leave,” Roth said. “I cannot imagine where we could change something substantial in the withdrawal agreement.”

May, due to meet Juncker and European Council President Donald Tusk later, said she would seek further assurances and ways to give British lawmakers powers over the Irish backstop.

As investors and allies tried to work out the ultimate destination for the world’s fifth-largest economy, rebel lawmakers in May’s party said she had to go.

“If we can’t go forwards with her deal … then I’m afraid the only way to change the policy is to change the prime minister and I really think it’s her duty to go,” Brexit-supporting Conservative lawmaker Steve Baker said.

A leadership challenge is triggered if 48 Conservatives write letters demanding one to the chairman of the party’s so-called 1922 committee, Graham Brady.

With little hope of substantial changes from the EU, the options open to Britain range from a chaotic Brexit with no deal to risking the wrath of pro-Brexit voters by calling the whole thing off.

Both May’s ruling Conservatives and the main opposition Labour Party have pledged to implement the results of the 2016 referendum in which British voters backed exiting the EU 52 percent to 48 percent.

Some opposition lawmakers called for a referendum while former Prime Minister John Major said on Tuesday that Britain must revoke its divorce notice immediately.

“We need to revoke Article 50 with immediate effect. The clock, for the moment, must be stopped,” Major, who also faced a revolt inside the Conservative Party over Europe, said in a speech in Dublin.

“It’s clear we now need the most precious commodity of all: time. Time for serious and profound reflection by both parliament and people. There will be a way through the present morass, there always is.”

Beijing’s new man in Macau is a former vice-minister of commerce, with the aim of bolstering ties with Portuguese-speaking countries. To more chinadailynetwork.com