Regulators Will Move to Rein In Proxy Advisers in 2019, SEC Chairman Says 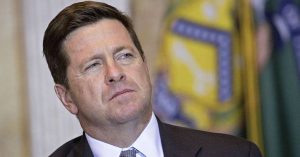 Securities regulators will consider a series of changes to curb the impact of consultants who advise on shareholder votes at public companies, Securities and Exchange Commission Chairman Jay Clayton said Thursday, responding to business groups who have argued they wield outsize influence.

The SEC will consider whether to impose new disclosure requirements for such so-called proxy advisers, who make recommendations to institutional investors about issues such as executive pay and environmental initiatives.

Corporate groups criticize proxy advisers as having too much influence on shareholder votes at public companies, and have called for tighter regulation of the two main proxy advisory firms, Institutional Shareholder Services and Glass Lewis & Co.

Mr. Clayton said the SEC would also take up recommendations to shore up the “plumbing” of the shareholder voting process, which some investors have said is opaque and error-prone. The commission will also consider raising the ownership thresholds for shareholders to submit proposals for shareholder votes and for the amount of support a proposal must receive for it to be reconsidered in subsequent years, in an effort to weed out recurring proposals that gain little support.

“It is clear to me that these issues will not improve on their own with time, and I intend to move forward with the staff recommendations,” Mr. Clayton said in remarks prepared for delivery Thursday at Columbia University in New York.

Reining in proxy advisers has been a priority of corporate groups like the U.S. Chamber of Commerce, which took out advertisements earlier this year in major newspapers urging the SEC to limit their influence.

ISS issues recommendations on about 6,000 U.S. companies every year. In 2017, it urged “no” votes on executive pay about 12% of the time, while only about 2% of corporate “say on pay” votes failed.

At an SEC roundtable last month, leaders of ISS and Glass Lewis, which combined control 97% of the proxy advisory business, made clear they oppose new regulations on their firms and say that existing disclosures serve investors sufficiently well. Proxy advisers would have to disclose more about how they came to their recommendations for particular companies or industries.

“The audience at the SEC Roundtable heard broad stakeholder agreement that additional regulation of proxy advisers is not warranted,” ISS wrote to the Senate Banking Committee, which held its own hearing on the shareholder voting system on Thursday. A bipartisan group of senators recently introduced a bill that would require SEC examinations of proxy advisers and reviews of their conflict-of-interest policies.

SEC Commissioner Robert Jackson, a Democrat, said he favored more transparency in the shareholder voting system, especially for institutional investors like asset managers who vote on behalf of retail clients. But he has questioned the importance of changing how investors interact with proxy advisers, saying there is little evidence the advisers wield too much influence on shareholder voting decisions.