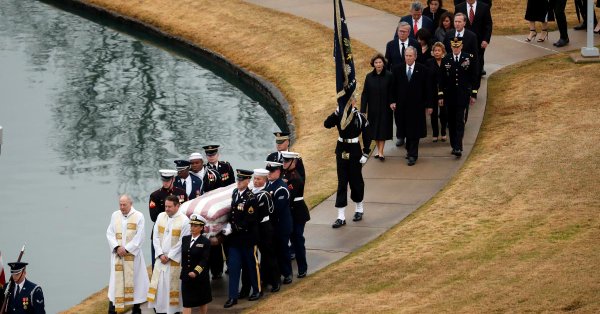 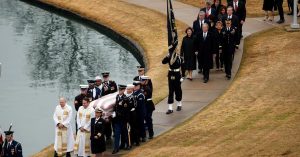 COLLEGE STATION, Texas (Reuters) – The body of former U.S. President George H.W. Bush was carried to the burial site at his presidential library in College Station, Texas, on Thursday after a funeral at a Houston church where he was remembered by family members who knew him best as “Gampy.”

Bush’s casket was carried to his grave behind his library by a military honor guard in a ceremony overseen by his son and former President George W. Bush.

Bush, the 41st U.S. president, died last week in Texas at 94. His remains were flown to Texas on Wednesday following a state funeral at the Washington National Cathedral attended by President Donald Trump, the four living former presidents and foreign leaders.

Thursday’s funeral service was held at St. Martin’s Episcopal Church in Houston, where Bush and former first lady Barbara Bush worshipped for more than five decades. The service took on a personal tone with remarks by family members.

George W. Bush, who followed his father to the White House, sat in a front pew near the flag-draped casket and joined in as some 1,000 mourners sang “America the Beautiful.”

George P. Bush, son of former Florida Governor Jeb Bush and one of the former president’s 17 grandchildren, remembered fly fishing and sharing ice cream with the man he called “Gampy.”

James Baker, a longtime friend who served as Bush’s secretary of state, eulogized the former president as a peacemaker and “a truly beautiful human being.”

“He was not considered a skilled speaker, but his deeds were quite eloquent and he demonstrated their eloquence by carving them into the hard granite of history,” Baker said.

Mourners laughed as Baker recalled how Bush would let him know a conversation was over: “‘Baker, if you’re so smart, why am I president and you’re not?’” His voice cracking at moments, Baker said he was at his friend’s deathbed last week.

Raised in an Episcopalian family in Massachusetts, Bush fused his preppy New England background with the more free-wheeling traits of his adoptive state of Texas, where he moved as a young man to work in the oil industry.