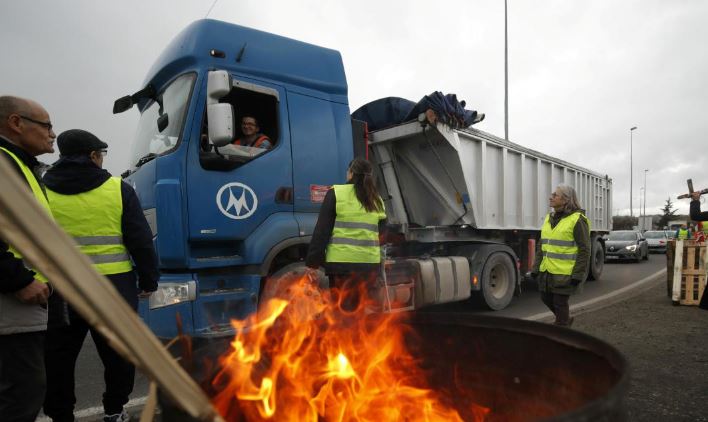 No leader, lots of anger: can France’s ‘yellow vests’ become a political force?

-It began as a home-spun Facebook campaign against French fuel tax increases. But in a few weeks it has spiraled into a movement powerful enough to force Emmanuel Macron into the biggest U-turn of his presidency.

Yet the “yellow-vest” movement — named for the fluorescent jackets carried by French motorists — remains an amorphous, hard-to-define group with a rapidly shifting agenda.

It has no leader. It named eight spokespeople, some of whom disagreed with each other and one of whom was promptly sacked. Members are broadly opposed to decision-making authority.

One of its originators, a 51-year-old accordionist from Brittany called Jacline Mouraud who also works in hypnotherapy and makes YouTube videos, received death threats after suggesting the movement should talk to the government.

Anyone who has a “gilet jaune” — and most people in France suddenly seem to — can put it on and become part of the movement, meaning it brings together people of hugely different ages, social classes, occupations and views.

This is its strength but also its weakness.

The government does not know who to engage with, even though the movement has drawn hundreds of thousands of people onto the streets, closing roads and fuel depots, and spurring riots and violence in the capital Paris on successive weekends.

Since Macron gave in to the movement’s main demand on Wednesday by scrapping a fuel-tax increase set for January, the “yellow vests” have also been trying to agree on other issues to fight for — from boosting household incomes to reinstating a wealth tax or ousting Macron.

“He betrayed us. He was elected promising to blow out political parties, no left, no right, to reconnect political power with the people,” Christophe Chalençon, a blacksmith from Provence in southern France who has become one of the more recognizable faces of the movement, told Reuters.

“He’s done the opposite. We’re only the mirror of what he had proposed, what he sold to us. We need a new representative body,” said Chalencon, who has been criticized for postings on social media that some have seen as anti-Muslim.

In an age of a populist backlash against globalization in the Western world, the “yellow vest” movement shares many features with other populist forces, such as the Occupy movement in the United States and Italy’s Five-Star, which now governs.

An opinion poll published by the Elabe Institute on Wednesday showed that in the presidential election in May 2017, many in the movement voted for candidates on the far-left or far-right, although many also didn’t vote.

They mostly have a high-school diploma or a lower level of education and live in tight financial circumstances, often in rural or outer-urban areas, where depending on a car to get to work or go to the shops is essential, and increasingly costly.

There is a high level of solidarity among volunteers who mount roadblocks, share food and post pictures together online. Polls show they still have the backing of about 70 percent of the population, despite the violence in Paris which the government blamed on “extremist” groups”.

Some government officials play down the prospects of such a diverse movement uniting as a political force.

“For the time being, no, they’re having trouble just structuring themselves,” a government source said.

But, with elections to the European parliament coming up next May, others warn against complacency, especially as Macron was taken off guard by the protest. Some members of Macron’s team say privately they did not expect the planned rise in fuel prices to be more politically explosive than other reforms.

Macron himself rose to power barely a year after creating his own movement, En Marche, in 2016 on a promise to be “neither of the left nor the right” and to introduce a new style of politics. His campaign book was called “Revolution”.

The “yellow vests” do not have the same education or work background as Macron — he had experience in government as a former economy minister. Yet ironically, they are using some of the same techniques as he used on social media and echoing some of the anti-establishment rhetoric.

“The yellow vests are a political movement, we need to stop feeling sorry for them,” Bruno Bonnell, a lawmaker in En Marche (On The Move) and an early follower of Macron, said.

“In three weeks, it’s transformed itself into the fiery core of a strong populist movement,” he said. “It reminds me of the start of En Marche. They’re our future opposition.”

Macron’s defeat may not stop anti-establishment

Macron enjoyed high ratings at the start of his presidency and managed to ram through changes to France’s labour code.

But his brash style alienated some voters and changes to a tax to reduce the burden on the wealthy earned him the label “president of the rich”. His ratings now hover in the low-20s and he is battling to keep his reform agenda on track.

His biggest threat now is from a popular national uprising that, while not associated with a political party, has elements that sympathize with the far-right and far-left and want a radical shake-up — the sort of new politics U.S. President Donald Trump and his former strategist Steve Bannon advocate.

“We can already see they (“yellow vests”) have huge appeal but this is because they are apolitical and can genuinely say they have nothing to do with political parties,” said Charles Lichfield, Europe analyst at Eurasia Group risk consultancy.

“For the ‘gilets jaunes’ to become a political force, they need to accept the notion of leadership and get over the fact that their chosen leaders will need to balance between various contradictory demands.”

France, a nation built on revolution, is not new to populist uprisings. In the 1950s, a shopkeeper called Pierre Poujade spurred anti-tax, anti-elite protests which eventually secured 52 seats in the French parliament in the 1956 election.

Although Poujadism, as it became known, eventually faded from view when war-hero Charles de Gaulle returned to power, it left a lasting legacy. The youngest member of its deputies was Jean-Marie Le Pen, the founder of the far-right National Front.

One of the “yellow vests”, Andre Lannee, has launched Facebook pages for protesters to elect two representatives per region. Another, Jean-Francois Bernaba, has said he is working on a list of candidates for the European Parliament elections, in which French voters traditionally back more populist parties.

Asked to assess the “yellow vests’” chances of contesting the European Parliament elections, which are based on a system of proportional representation, Lichfield said they would first have to organize quickly and find a charismatic leader.

“They will understand that a proportional ballot gives them their best chance of making a splash,” he said.