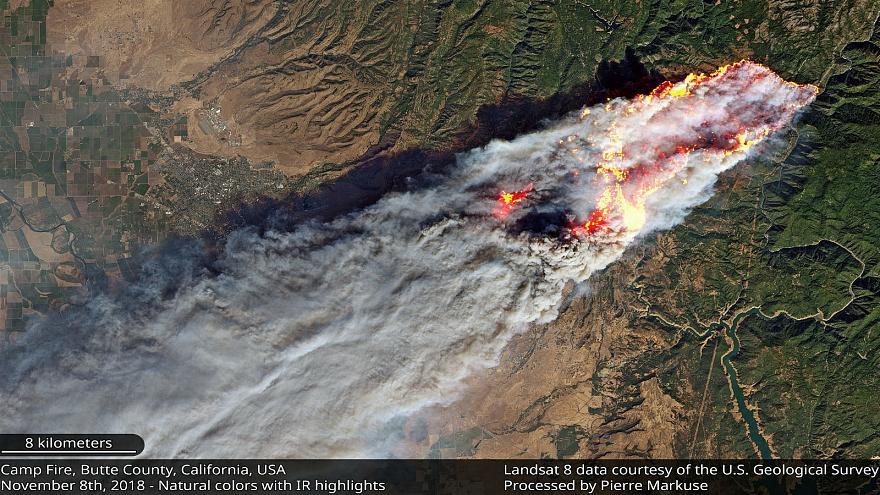 The extraordinary scale of destruction in the California wildfires is caught by the US Geological Society’s Landsat 8 satellite.

Thousands of acres of land have been destroyed by fires along with hundreds of homes and businesses and whole communities have been wrecked in the most lethal wildfire storm since records began.

Firefighters beat back a new round of winds on Sunday and the fire’s growth and destruction are believed to have been largely stopped.

Malibu celebrities and mobile-home dwellers in nearby mountains were slowly learning whether their homes had been spared or reduced to ash. Two people were killed and the fire had destroyed nearly 180 structures.

Lady Gaga, Martin Sheen and Kim Kardashian West were among the celebrities whose coastal homes were damaged or destroyed in a Southern California wildfire or were forced to flee from the flames expressed sympathy and solidarity with less-famous people hurt worse by the state’s deadly blazes, and gave their gratitude to firefighters who kept them safe.

Hollywood stars took to social media on Saturday to show their anger at President Donald Trump for his tweet in which he blamed “gross mismanagement of the forests” in California for a trio of deadly wildfires blazing across the state, and threatened to withhold vital federal funding to fight the infernos.

Katy Perry, Bette Midler, were among the celebrities who expressed their unhappiness at Trump for his tweet.

“This is an absolutely heartless response,” singer Katy Perry tweeted. “There aren’t even politics involved. Just good American families losing their homes as you tweet, evacuating into shelters.”

“The reason these wildfires have worsened is that of climate change and a historic drought,” he tweeted. “Helping victims and fire relief efforts in our state should not be a partisan issue.”

Flames also besieged Thousand Oaks, the Southern California city in mourning over the massacre of 12 people in a shooting rampage at a country music bar last Wednesday night.

The scale of the damage on some of the most expensive properties in the world will cost billions to repair.