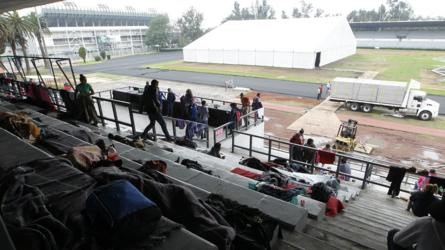 The first migrants from a large convoy of people travelling through Mexico towards the United States have arrived in the capital, Mexico City.

About 450 people, mostly men and boys, have been given temporary shelter at a sports stadium.

The convoy, known as a caravan, set off from Honduras several weeks ago and is now about 5,000 strong.

US President Donald Trump says troops will be deployedto stop them crossing the US-Mexican border.

Critics have accused Mr Trump of using the threat of illegal immigration to fire up his supporters ahead of Tuesday’s mid-term elections.

The migrants says they are fleeing persecution, poverty and violence in their home countries of Honduras, Guatemala, and El Salvador.

Many of those arriving in the Jesus Martinez Palillo stadium on Sunday had walked or hitched rides from the state of Veracruz.

“From what I brought from Honduras I have nothing. Even yesterday I walked barefoot,” Kenia Alvarado, 21, told El Universal newspaper after arriving at the stadium. 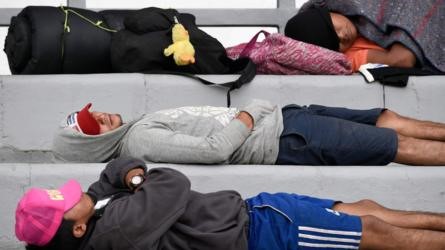 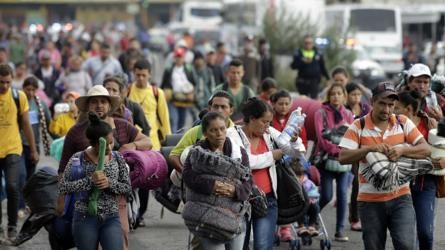 Veracruz Governor Miguel Angel Yunes said on Friday that buses would be provided to take migrants to the capital – but the offer was later withdrawn.

“Our heads are set at getting to the United States, to fulfil the American dream,” said Mauricio Mancilla, who had travelled from northern Honduras with his six-year-old son. “We have faith in God that we will do this, whatever the circumstances.”

Authorities in Mexico City say they have prepared food and shelter as well as medical services and legal advisers for the thousands who are expected to arrive in the coming weeks.

Tanks capable of holding 10,000 litres (2,200 gallons) of drinking water have been installed in the stadium, La Jornada reported.

“There are pregnant women, many children, vulnerable people and we have to guarantee the space and the services they require,” said city leader José Ramón Amieva Gálvez.

Residents of Mexico City have also donated clothes and shoes for the travellers, local media reported.

President Trump has said he will use the military to completely close the US-Mexico border if necessary to stop the migrants crossing. He also threatened to cut aid to Guatemala, El Salvador and Honduras.

Nevertheless, many in the caravan say they plan to seek asylum in the US.