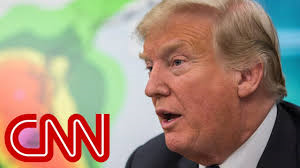 Between Maria and Florence, President Trump was lost in translation.

In an article published by aclu.org  just after Hurricane Maria hit the Island of Puerto Rico.

This Island, since before the Hurricane Maria, has been suffering from poverty and considered to be the poorest amongst all of the U.S. States, it is double that of Mississippi the poorest among all states.

ACLU pointed out a very important legal statue of the Island. The Supreme Court ruling on its status that did not grant them full constitutional rights similar to other states have deprived them from any government programs like Medicaid and Medicare.

“The Maria Generation: Young people are dying and suffering on an island with a highly uncertain future”

CNN spent 3 weeks investigating the current situation of the Island. They reported the findings of a survey on the hardships experienced by Puerto Rico students,

“According to a survey of more than 60,000 students conducted by the Puerto Rico Department of Education and the Medical University of South Carolina, public school students in Puerto Rico experienced high rates of depression symptoms and other problems in the aftermath of Hurricane Maria. Many students have experienced hardships that can lead to hopelessness or suicide.

Reuters reported, just after the Hurricane Maria, on September 30, 2017

Just a few days after on 4 October, 2017 in headline from the Telegraph in London.

President told them that only 16 has died, this is nothing and it does not compare to Katrina where hundreds were killed. He sounded like that there is competition on the death toll and that Puerto Rico cannot claim the title.

Then in September 15 while Hurricane Florence was hitting the East Coast, President Trump bring back Hurricane Maria to the table after a report published by the researchers at George Washington University that the numbers of death were in excess of 2,975 people because of the failure electricity and infrastructure.

The final findings were not pleasant to the President and his reaction was magical as always.

We are not hear trying to questions the integrity of the research or President Trump’s response but the real conclusion of this tragedy is result of the inadequacy of FEMA to response and the Federal Government to help restore electricity and infrastructure that made every survivor subject to death or devoted from sickness or mental depression.

To really understand the true nature of inequality we should really pay attention to the reaction of president Trump to Hurricane Florence,

“My administration will not rest until the job is done.” Mr. Trump also offered his thoughts to the people of North Carolina, South Carolina, Virginia. He also said “that 20,000 federal personnel have been deployed. He said they are “putting their lives on the line.”

Now compare this to his reaction in the aftermath of Maria Hurricane cited above.